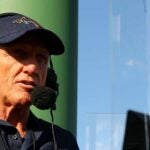 Greg Norman is among this year's Ryder Cup rookies.

The list of professional golf events Greg Norman has not attended is … short. Really short. In hearing him speak about his career, one realizes it’s entirely possible Norman has forgotten more tournaments than most diehards see in their lifetime. So much should be expected from a player who spent decades crisscrossing the globe as one of the world’s most recognizable ambassadors for golf.

There’s the Kemper Open in Potomac, the Greater Milwaukee Open (surprisingly in Brown Deer), the Canon Hartford Open, the NEC World Series of Golf … and those are just from the list of his wins. The total number of tournaments contested is orders of magnitude larger (and weirder).

And yet today, in 2021, there’s one glaring omission from the Norman Tournament Rolodex™: the Ryder Cup. Yes, in all his 66 years, Greg Norman has never attended the Ryder Cup. This, despite penning an op-ed for Newsweek in 2016 titled, “Why, as an Australian, I still love the Ryder Cup.”

“Golf is an individual sport and when I became a professional I always missed my team game days playing rugby and cricket,” Norman wrote at the time. “That’s one of the reasons why I love the Ryder Cup so much. It gives golf the opportunity to be part of something bigger than yourself.”

“Bigger than yourself,” sure, but big enough to include Greg Norman? Well, not so much.

He shrugs when he’s asked why he never attended a Ryder Cup despite his (documented) love for team golf and various efforts to internationalize the game of golf — efforts that are no doubt aided by the Europeans.

“I’ve never really had a reason to go,” he says. “And it’s not like I ever competed in the thing. There were always other things going on.”

Those efforts will change this week, when the Shark steps into the booth for SiriusXM to anchor the audio giant’s first tee coverage from the Cup. He’ll work alongside Brian Katrek, Maureen Madill, Mark Carnevale, Carl Paulson and John Maginnes in handling radio coverage from Whistling Straits (beginning at 8 a.m. ET on Friday and Saturday, and noon ET on Sunday).

The move is just the latest extension for Norman into the media landscape, who has transitioned into the audio space after leaving television in 2016. He hosts “Attack Life Radio” on SiriusXM PGA Tour, a monthly, hour-long show about golf and business, which has provided a natural runway into live event coverage. In April, he broadcast his first Masters from Augusta National.

“It was overwhelming for the first hour, but then someone said to me, ‘speak as if you were describing what’s happening to a blind man,'” Norman remembers. “After that, it clicked.”

From his post, he’ll call the first Ryder Cup shots of all nine rookies, including Xander Schauffele, Collin Morikawa and Shane Lowry. And Norman will have one of the very best seats in the house at Whistling Straits, located next to the cavernous first tee bleachers that are sure to produce some of the loudest ovations from tournament week.

Sometimes, it’s good to be a first-timer.

– Azinger will also serve as lead analyst for this year’s Ryder Cup coverage across Peacock, Golf Channel and NBC. He’ll join NBC’s usual cast of characters, including Dan Hicks, Roger Maltbie, “Bones” Mackay and John Wood, among others. Mike Tirico will also handle some play-by-play duties — a role he handled for years as part of ESPN’s Open Championship coverage.

– The NBC family of networks will air more than 100 hours of live coverage from the event, including 28 hours of live golf. On Sunday, Rolex will bankroll an hour of commercial-free action beginning when the final singles matches tee off.