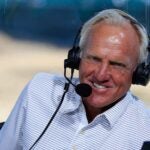 Greg Norman will return to the Masters in 2021 as SiriusXM's new lead analyst.

Forty years ago, an upstart Australian entered the weekend in contention at his first Masters. He was just 26 years old and looked more at home at a Styx concert than wandering the fairways at Augusta National. Long blond hair flowed over his ears, and his smile flashed brilliant white teeth.

His name was Greg Norman, and nobody had ever heard of him.

Here is how Dave Anderson, a legendary sportswriter for the New York Times, detailed the mysterious young contender:

“To describe Norman as blond is almost an insult. His shaggy hair is more creamy white than yellow. If Nicklaus is golf’s Golden Bear, Norman is golf’s Polar Bear. But if the 26-year-old Australian must have a nickname, call him golf’s Great White Shark. He not only lives on the coast near the world’s largest shark-breeding ground, but he also shoots sharks with a .303 modified Australian army rifle.”

And so, a nickname was born.

Now nearly a half-century later, the Shark prepares to return to Augusta National once again. On Tuesday, SiriusXM named Norman the lead analyst for its Masters coverage; it will be Norman’s first time back in the broadcast space since his split with Fox Sports in 2016.

“You do what you can to get back to the Masters,” Norman said, laughing, in an interview with GOLF.com earlier this week.

Norman is no longer a wide-eyed kid — he’s 66 — and he never did win a green jacket, but the opportunity to return to Augusta still was too good to pass up.

“I love it so much,” he said. “There’s so much history there, I’ve come so close enough times, got great friends in the membership, and obviously the patrons have a lot to do with it as well.”

Norman’s tortured past at the first major of the season is well-chronicled history, but less clear is why his love for the tournament hasn’t faded, even after so many dispiriting Sundays.

“You know, I’ve never cried over spilt milk. It’s just a game, right? It’s just sport,” Norman said. “I’m not going to really talk myself into a position where I’m going to sulk the rest of my life because I don’t have a green jacket. It’s just the game, it’s just sport.”

In his role with Sirius, Norman will once again spend Masters week on-site at Augusta. Each day, he’ll help anchor tournament coverage in the radio behemoth’s first year of exclusive broadcast rights to the event.

“Greg’s experience playing in the Masters and his knowledge of Augusta National are exceptional,” Scott Greenstein, SiriusXM’s president and chief content officer, said in a release. “We couldn’t be more thrilled to have him as our lead analyst.”

Greg Norman on his Masters history

Norman’s preparation for the event is already well underway, including for the transition from television to radio, which he feels better aligns with his strengths. While the unpredictable frenzy of instructions from producers made TV feel disjointed and uncomfortable in his first go-round with Fox, Norman said he’s hopeful radio — which is slightly more straightforward from a broadcast perspective — will be a more natural fit.

“From what I understand (with radio), you just see what you see on TV and you react, you’re in and out, it’s very quick delivery,” he said. “You spend a lot of time with a lot of words trying to explain, why did they go chunk it in the pond in front of 15?”

As for the tradition of nicknaming players, might Norman partake? Fellow Queensland native Cameron Smith is an option, though Norman concedes “Mullet Man” (his personal choice) might not resonate with golf fans in the way that the Shark did.

“A couple of guys, like Bryson, he could go with a good nickname,” Norman said with a laugh. “I’ll have to think about that for a little bit.”

For Sirius listeners, Norman’s passion for Augusta National will be difficult to miss. Some four decades after his first Masters start (and after too many rounds on Alister MacKenzie’s masterpiece to count), Norman said he’s still awestruck by the tournament, its history and its traditions. And even though he never won at Augusta, Norman said, perhaps no course has taught him so many lessons about golf, life and “humility.”

“Connecting all the dots with the Masters is pretty simple,” he said. “The only thing I never connected with was a green jacket.”