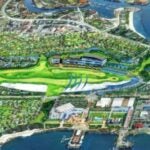 Talk about a golf course with some bite.

Australian golf legend Greg Norman has never been shy about leaning into his Great White Shark persona. His finned Shark logo adorns apparel and wine bottles and high-tech golf carts. There are even a pair of Shark wakeboarding parks, in Myrtle Beach, S.C., and West Palm Beach, Fla.

But a shark-shaped … golf course?

It’s not a reality yet, but it is a possibility.

Earlier this month Norman’s design company announced that it had inked a deal for a masterplan agreement with a residential golf course development in South Australia.

The project — which Australian developer and former weightlifter Dan Lukin Jr. originally tried to get off the ground in 2012 before economic challenges derailed it — includes plans for a Greg Norman Signature Golf Course surrounded by high-end residential units.

When renderings of the property, called Port Lincoln, first surfaced, they included an eyebrow-raising image: a shark-shaped golf course at the center of the community. Design purists scoffed. Skeptics wrote off the graphic as a publicity play.

In a press release about the project, Lukin added: “I am very excited to have Greg Norman involved in this project as I am hugely passionate about this beautiful region. There is nobody better than Greg in achieving an aesthetic, well-planned and creative golf course development and I am supremely confident everybody will be pleased with the outcome.”

Question is, will that outcome actually resemble an ocean predator?

When contacted by GOLF.com, a spokesperson for Greg Norman Company said in an email that “the shark course was the original concept envisioned by the Lukins (not by Greg). It never came to fruition.”

As for plans for the new design, the spokesperson said, “The golf course has not been designed yet. Not sure if [the shark design] is feasible or not.”