Some desperate golfers are sneaking onto closed courses across the U.S. 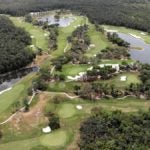 An empty golf course at Walt Disney World, which is closed due to the coronavirus.

As the shutdown of non-essential businesses and activities in much of the U.S. drags on, golfers are starting to get antsy. While some states and communities have allowed citizens to continue playing golf, many others have prohibited play and shuttered golf courses.

It turns out that in those places where golf is temporarily banned, some people have been ignoring orders and sneaking onto golf courses to get in a few holes.

David Segal of the New York Times explored the growing issue in a recent report. Segal focused his attention primarily on the problem in Florida, where golf is currently prohibited in three counties. He spoke to several golfers at Westchester Country Club who were following their own rules about whether or not to play.

“I think this is fine. We’re walking around, getting some fresh air,” Diane Koltun told Segal.

Another golfer, Ira Lipshutz, explained to Segal that while he wasn’t concerned about any safety issues, someone else in his household was.

“My wife’s not thrilled that I’m out here,” Lipshutz explained to Segal. “She’s much more cautious than I am.”

But the problem of golfers breaking prohibitions to play the game they love in these troubled times is not limited to Florida. According to Segal, several states in the Northeast are also dealing with what he calls “renegade golfers,” including New York City which has seen police officers force 300 players off local courses (N.Y. Governor Andrew Cuomo recently allowed courses to reopen in the state if they follow strict safety guidelines). The same is true for other cities like York, Pa., and Brockton, Mass.

To the north in Ontario, Canada, golfers have been threatened with steep fines if they dare break the shutdown rules.

Golf’s governing bodies in New Jersey recently sent a letter to Governor Phil Murphy asking him to remove golf courses from the list of non-essential businesses and allow them to reopen for play. They assured the governor when he did choose to let courses open back up, they would enforce guidelines to keep golfers safe.

Fortunately for golfers located in the United States, more and more golf courses are being opened for play every week. The National Golf Foundation recently found that nearly 50% of courses around the country are allowing golfers to tee it up. If courses near you are open, and you would like to get out of the house and play a round, you should still follow all the social distancing guidelines for safe play on the course.

You can read Segal’s full report for the New York Times here.