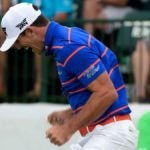 Billy Horschel celebrates in 2016 after hearing that his Florida Gators defeated LSU in college football.

Sometime in the early afternoon on Saturday, Nov. 14, during the third round of the Masters, Billy Horschel may break one of Augusta National’s rules. A few other golf pros might, too.

Horschel may discreetly walk over to his golf bag, make it look like he’s reaching for a ball, a tee or a snack, and then reach for that cell phone.

Horschel’s Florida Gators are hosting Missouri in college football that Saturday, too.

“What you may see, and hopefully no Augusta member hears this and it’s frowned upon there, but there will be a lot of guys that will have their phone on, be checking their bag and look at scores,” Horschel said earlier this week on College Sports on SiriusXM radio. Cell phone use is strictly prohibited at Augusta National during the Masters.

“So if you see a player Saturday at Augusta go to his bag and sort of try and hunch over like he’s trying to protect something, it’s because he’s probably looking at his phone looking at football scores.”

There will be quite a few to look at. The Masters’ move from its usual April date to November due to the coronavirus potentially creates a fall Saturday unlike any other – a golf major going up against college football (and the NFL on Sunday). Among the scheduled games on Nov. 14 are Washington at USC, TCU at Texas and Michigan State at Penn State. Stanford, the former school of defending Masters champion Tiger Woods, hosts Colorado.

“Every PGA Tour player loves the fall, especially SEC guys, because we talk about each others’ teams,” Horschel said. “There’s a lot of smack talk going on. We’ll talk about recruiting now that there is an early signing period in December. There’s so much to talk about now in the fall. We enjoy it.

“It would be something I think would be a benefit at Augusta this year as I’m playing with some of the boys.”

About 100 west of Augusta, Georgia hosts Tennessee. Kevin Kisner, Bubba Watson, Harris English, Brian Harman, Russell Henley and Keith Mitchell all played golf for the Bulldogs. All will be dialed in to the Bulldogs’ score, Horschel said.

“The Georgia boys talk the most crap out of anybody on the PGA Tour,” Horschel said. “Those guys just yap and yap away. Whether their team is winning or not, they are always very proud of their Bulldogs, and they never shut up. I’m just imagining myself playing with Kiz on Saturday, Kevin Kisner, and him just talking about Georgia.”

Could there be potentially more college football talk at Augusta?

On the day Augusta National announced it was moving the Masters to November, ESPN college basketball analyst Dan Dakich wondered whether “College Gameday,” the network’s college football preview show, would set up at a golf course.

“Love this!! What do ya think @leefitting?” he tweeted.