You could get fined $100,000 for playing golf in this city right now 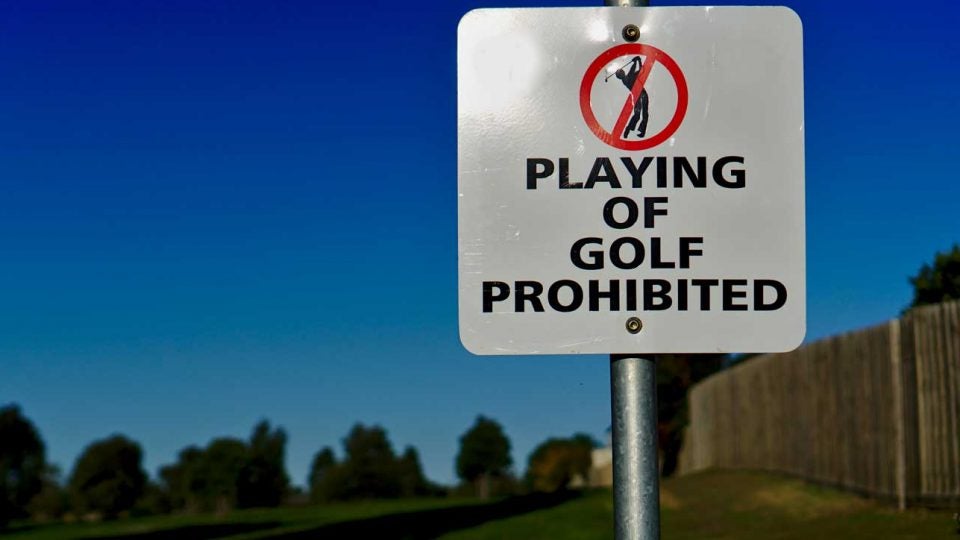 Golf is currently prohibited in the town of Brampton, Canada.
Getty Images

The coronavirus pandemic has taken a toll on golfers everywhere, with all major pro golf tours shuttered until at least the middle of May. Playing golf, on the other hand, is considered by many to be a safe activity while practicing social distancing. But that depends on where you want to play golf.

In the U.S., there is a patchwork of regulations for playing golf during the current crisis, with some communities encouraging it (albeit with a few new rules) and others banning it along with other group activities. But one town in particular is not messing around when it comes to stopping golf from being played.

That city is Brampton, Ontario, which is part of the greater Toronto area and has a population of 603,346 (as of 2017). Based on new social distancing bylaws signed by mayor Patrick Brown, anyone caught playing golf on city courses will face a fine of anywhere from $500 to a whopping $100,000 (in Canadian dollars).

Why threaten such severe fines, you may ask? All parks and playgrounds have been closed in Brampton since March 26, but residents have been flouting the rules, forcing Brown to take further action to prevent residents from using closed city properties, including “playgrounds and other structures in parks, leash-free dog parks, picnic shelters, outdoor sports facilities and outdoor fitness equipment, including sports fields, basketball and tennis courts, recreation centres and surrounding lands, and parking lots.”

“These fines will ensure that those that disrespect the advice of public health to keep us all safe – there will be consequences for those actions,” Brown said in a report by CityNews.

The Brantford order signed by mayor Kevin Davis, officially known as the Emergency Management and Civil Protection Act, expands on regulations passed by the Ontario provincial government by “prohibiting the use of amenities such as playground equipment, picnic tables, benches, shelters, exercise equipment, pads, and courts, located in any municipal park or on property owned or operated by The Corporation of the City of Brantford.”

But unlike in some regions around the world, the order in Brantford specifically “closes all municipally-owned or operated golf courses and sports fields for play.”

Taking walks on city courses is still permitted, but residents must be careful to not even carry a golf club during their stroll. If they do, they will likely be smacked with a fine of $1,000, nowhere near as high as the fines in Brampton, but serious enough to keep golfers from playing.

News
More people are searching for ‘golf’ than ‘coronavirus’ in these two U.S. cities

For the citizens of the U.S. reading this post, 100,000 Canadian dollars is equivalent to a still-stratospheric 70,336.60 in USD based on current exchange rates.

While Brampton and, to a lesser extent, Brantford are taking especially tough stances against golf during the current crisis, not all cities and regions are taking the same route. Be sure to check in with your local course or city officials if you want to tee it up anytime soon. If your government still allows it, playing golf is a great way to get some fresh air and stay active right now.