Year of the Birdie: In 2020, golf became the perfect activity for these unprecedented times 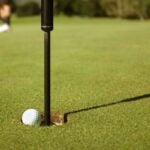 Many golf courses have added raised cups as a safety measure.

Ed. note: GOLF senior writer Alan Shipnuck is counting down the six most impactful and enduring stories from a golf year that was at once weird and wonderful, unnerving and uplifting. This is the final installment in the series.

The coronavirus pandemic decimated numerous industries in 2020 but among the few that have benefited: golf. Turns out our favorite game is the perfect leisure activity for these unprecedented times. Social distancing is a breeze, and the fresh air, sunshine and companionship a needed tonic for many who are otherwise sheltered in place.

Beginning in the spring, courses embraced little changes to make the experience even safer: flagsticks stayed in holes so they don’t need to be touched; cups were raised and bunker rakes, ball-washers and benches removed; caddies avoided touching their players’ gear; carts took a back seat to walking. Taken as a whole, the golf experience offers a peace-of-mind that is otherwise nearly impossible to find once you venture out of your home. The game’s benefits have never been more apparent, and its surge in popularity has parallels to another unlikely boom time, during World War II.

Days after Pearl Harbor, John Kelly, the newly created Golf Deputy within the Office of Civilian Defense, sent a letter to state and national golf associations laying out the benefits of the game which still rings true today: ”This is the time when golf really must score for the physical and mental conditioning of American citizens under wartime pressure. Golf’s strong attraction as a sport in which our citizens exercise regularly in the open-air qualifies the game for national service of a vital character. Therefore we are urging the golf clubs and organizations of America to exert themselves to meet the requirements of individual and collective physical fitness.”

Now, we are battling a different kind of enemy, and golf’s popularity has reached historic proportions because of it. The National Golf Foundation reported that in August 2020 rounds-played in the United States were up 20.6 percent, the largest year-over-year increase since the numbers began being tabulated a quarter-century ago. Then September smashed the record by increasing 26 percent year-over-year, representing about 12 million more rounds.

The hits just keep coming: In November monthly rounds were up a whopping 57 percent over the same period last year. The equipment industry has seen a corresponding spike. According to Golf Datatech, an independent market research firm, July sales of golf gear eclipsed $388 million, the highest monthly total since the company started tracking data in 1997. The cash registers have continued to ring as the third quarter sales totaled more than $1 billion.

“Some of the regular weekdays have felt like a Black Friday,” says Derek Westover, the assistant manager at Golf Mart in Seaside, Calif., a house of worship for Monterey Peninsula golfers. “We had lines of people outside just waiting to get in.”

Westover noticed a particular enthusiasm as far back as April, when the federal government’s $1,200 stimulus checks were received. “A lot of cash started coming over the counter,” he says. “I think guys didn’t want a paper trail so wifey wouldn’t know what they were spending the checks on.”

Jitters about the supply chain led to a run on golf balls at Golf Mart. The past as always is prologue: On Dec. 17, 1941, the federal Office of Price Administrations announced a rationing plan for civilian use of rubber products and the next morning the Abercrombie & Fitch store in New York City was cleaned out of 24,000 balls, its entire inventory. Factory-refurbished used balls became such a thing that Gene Sarazen used one in the second round of the 1942 Masters, prefiguring Americans who would turn t-shirts into face masks to thwart the coronavirus.

Golf-club fittings have also surged in 2020. At True Spec Golf, which is owned by GOLF.com’s parent company, 8AM Golf, fittings from June through December outperformed company forecasts by 150 percent, according to Ryan Richardson, True Spec’s president and COO.

“Historically, the average handicap of our clientele has been around a 10,” Richardson said. “Over the last half of this year, this number has grown to a 13, which tells me that far more novice golfers are taking the game more seriously and making sure they have the proper equipment in their bags.”

Why has golf become such a popular pastime in the Covid era? “Let’s face it, the locals don’t have many other options for entertainment,” says Pat Jones, general manager of Bayonet-Black Horse, a bustling 36-hole public facility in Seaside, Calif. “There are no Giants games to go to, no movie theaters, no concerts. The gyms aren’t the same. I guess the big question is how many of these golfers we’ll keep in the long run. But we’re certainly happy they’re here now.” Jones says he has noticed among new or returning golfers more groups playing scrambles and other non-traditional forms of the game to keep up their pace of play and have a little more fun on the two demanding golf courses.

A crucial demographic for growing the game is juniors, and, from a golf perspective, that is some of the best news to come out of this unusual year. NGF research shows the number of golfers ages 6 to 17 has risen by as much as 20 percent, and the increase is even more dramatic at Bayonet-Black Horse, where juniors who are members of the Youth On Course initiative can play for only $5. “On summer weekends in the past, we might have 10 kids come out,” Jones says. “Now, with no soccer or Little League or any kind of camps, we were getting 40 or more.”

That didn’t change with the end of summer. Kids doing at-home learning still need to get outdoors, and with organized sports largely shut down, golf remains an attractive option for family fun. Case in point is Kevin Price, one of the Monterey Peninsula’s most ardent golfers; he is the 2019 club champion at Bayonet and a part-time caddie at Pebble Beach when he’s not running his financial services company.

“Holy cow, it’s been hard to get a tee time around here,” Price says, “but it’s pretty cool to see new people experiencing the joys and benefits of the game.”

Price can often be found on the links with his adorable 4-year-old daughter Claire. She totes her own clubs and putter and will hit a shot or putt when the mood strikes. “The pandemic has been tough on all of us,” Price says. “When the golf courses reopened in early May, taking Claire out was a real morale boost with legitimate mental-health benefits. Schools were closed, playgrounds were closed, the beach was closed at times — the golf course became our sanctuary. It has gotten me away from doomscrolling on my phone, from the grind of day-to-day life.” Speaking for many, Price adds, “I honestly cannot imagine pandemic life without golf.”