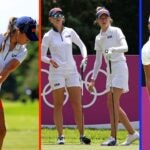 Four female golfers are representing Team USA at the Olympics, and they're among the favorites to medal in Tokyo.

When the women’s Olympic competition begins this Thursday at Kasumigaseki Country Club, just outside of Tokyo, Team USA will be well-represented.

Olympic qualifying rules stipulate that only two players from each country are allowed into the competition — unless they’re inside the top 15 in the world. In that case, up to two more players can represent each team. That’s good news for the American women, who had exactly four women — Nelly Korda, Danielle Kang, Lexi Thompson and Jessica Korda — qualified. They’re now among the favorites to medal at this week’s Games.

Nelly Korda has been downright dominant in 2021 on the LPGA Tour. In 12 starts she has made 11 cuts, recorded six top-three finishes and won three times, including twice in her last three starts. She became a major champion and ascended to World No. 1 via victory at the KPMG Women’s PGA Championship. Now she’s the 7-1 frontrunner to win the gold.

For Korda, this is the middle of a whirlwind stretch.

“So it’s a long stretch, but we can’t wait, it’s going to be a lot of fun and I’m already excited to get the week going.”

Kang has been the picture of consistency this season. Like Korda, Kang has missed just one cut. In 13 starts she has four top-five finishes and seven top-10s. And she’s made it clear just how excited she is to be on Team USA.

“To be able to represent your country, especially at the Olympics is probably the highest honor that we could achieve,” she said. “Being able to be part of the Olympic Games for me actually let me know that I did something right. It’s the ultimate approval that, as an athlete, I’ve done something right.

While Thompson hasn’t had the best season of her career, she has maintained a high standard of play all of 2021; she has made every cut in 13 starts and notched three top-three finishes, most notably at the U.S. Women’s Open, where she held a five-shot lead before ultimately finishing third.

Thompson started her Olympic week off in style with a hole-in-one during Monday’s practice round.

“It’s the Olympics, it’s not just another event,” Thompson said. “We’re out here with the best of the best of the athletes of all these different sports, it’s like Danielle said: It’s the highest honor you can possibly have, to represent your country.”

Nelly’s older sister Jessica won her first start of the season, the Diamond Resorts Tournament of Champions, and added a solo second in Los Angeles and a third-place finish in Williamsburg. Like Thompson, she hasn’t missed a cut this season — and she spoke to teammate and fellow south Florida resident Justin Thomas about what to expect this week:

“He’s like, ‘Wait until you land here, it’s going to hit you,'” Korda said of her texts with Thomas. “And I was like, ‘Okay, I can’t wait.’ And he’s right, I mean the whole experience for us, I don’t feel like we were really prepared for what it was going to be like, and like he said it just kind of hits you when you get here.”

How to watch the Olympic women’s event on TV

You can watch the 2021 Olympics women’s golf competition on Golf Channel. Due to the time change, Wednesday’s first round will air live beginning Tuesday night for viewers in the United States. Check out the full women’s Olympic golf TV schedule below.