It’s Jet Lag Season! Olympic golfers are dealing with it more than ever 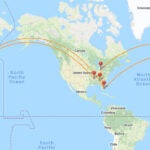 Here are the flights Justin Thomas has taken in the last four weeks.

KAWAGOE, Japan — Staying awake past 9 p.m. is easy for most of us, unless you’ve just deboarded a 15-hour flight 13 time zones away from home and your body thinks it’s Wednesday even though the newspapers swear it’s Thursday.

Welcome to Jet Lag Season for professional golfers. Both the men and women are dealing with it, perhaps more than ever.

The Olympics’ place on the world sports calendar works out fine for the NBA and Premier League Soccer, two worldwide sports leagues currently in their respective offseasons. But the Olympics schedule isn’t ideal for pro golf. The men’s major season ended two weeks before Xander Schauffele won gold, and the Tour’s big-money playoffs kick off just two weeks from now. The LPGA Tour finished a major championship just nine days ago, and they’ve got another one just 16 days from now. These tournaments, of course, are hosted all over the world.

“As soon as you get used to it, it’s ready to go back home,” Justin Thomas says. He posted his recent travel schedule on Instagram Monday night (Tuesday morning in Japan), which included 23,587 miles in the air. That’s about the distance from New York City to Houston … if you went in the opposite direction around the entire world.

“I’ve been talking to a couple girls about this,” Sophia Popov said Tuesday. “I feel like it’s so dense in the middle of our schedule. Like this summer we still have quite a few events to go, but to me it feels like we’re at the end of the year already. But then I look ahead at what we still have to play and it kind of makes you think. You’re like, ‘Where can I take my breaks?’”

Popov won’t get a break until after the Solheim Cup, she thinks. Nor will Thomas, who is now in Tennessee. He and the other top male Olympians were really forced to take a break between the U.S. and British Opens. Suddenly, players who opted out with scheduling concerns don’t feel like such an affront to the IOC. When pros ventured to Rio in 2016, they were dealing with a one-hour time change, and at least one week off before many of them would play again.

Of course, we don’t need to throw a pity party for the folks who often sit in first class, or who often fly private like Thomas tends to. They’re all used to traveling. It comes with the job. The thing that’s difficult to get used to is what that does to your body.

Nigel Tilley is the physiotherapist for Team Great Britain’s golfers in Japan, and has been working with them on everything body-related, particularly getting them into a new sleep rhythm. When I asked him for some tips, he suggested an article he wrote years ago on this exact topic. Sleep deprivation, he wrote, can change one’s hormones, reduce your body’s normal healing capabilities, limit your ability to produce glycogen (and therefore energy) and hamper your ability to make decisions quickly. To sum it up in one word, all that flying makes you prone to being sluggish.

Thomas actually incorporates one of Tilley’s main tips. Regardless of wherever he’s flying from, he sets his watch to whichever time zone he is headed. Japanese Time is 13 time zones ahead of Atlanta, where Thomas’ took off from five days before his first round. Tilley also advises athletes develop an eating schedule that fits where they’re headed. And if the time change is significant — as Thomas has done four times in the last 4.5 weeks — Tilley says to begin that eating schedule at least a day before departure. Eat late at night if you have to. It’ll help when you arrive. Also, don’t drink alcohol and use compression socks if possible.

For the players competing in Japan, and for this bleary-eyed media member, that 9 p.m. threshold seems to be an important one. The Korda sisters had it in mind when they arrived last weekend, and built their first day around staying awake until then. Unfortunately for Nelly, it just didn’t work. “I woke up at 1:30 a.m. thinking, ‘Oh, I’m ready to get my day going, it’s probably 7 a.m.’” she said. “Nope. And then I couldn’t fall asleep until around 4:30.”

The Kordas had done pretty much all they could do at this pandemic Olympics. There are restrictions on everywhere you can go as a foreign visitor, but one of the spots they can access is the Olympic Village. They aren’t staying there, but paid a visit just to buy themselves some time.

Jess: “We tried to stay away from the comfy bed.”

Jess: “You lay down, you’re done. Like, you’re not getting back up.”

Pro athletes, and pro golfers in particular, are used to this chaotic lifestyle. They might not get enough credit for handling it. Paul Casey mentioned that people wear special glasses and even take supplements to ease the change on their body. But at some point, there’s only so much you can do. “Just getting on with it,” Casey said. “I’ve talked a lot to some other sports where they have studied it a lot, but just get on with it.”

Excitement for this worldwide event doesn’t help. Media have been applauding that fervor for months now. (Guilty as charged!) Golfers in Japan have been feeling it for weeks. Thomas texted Jess Korda that the country pride hits you upon arrival, and she agreed. But excitement and anticipation don’t often agree with a good night’s rest.

Having made the journey myself, and waking up at 3:30 a.m. during Sleep No. 1, I was hopeful to find a first-hand account from any of the athletes, especially one who is thrilled to be here. After a full week of settling in to Japan Standard Time, I strategically sent Mel Reid an email on the day of her arrival, and I got exactly what I wanted in return: a restless reply with a telling timestamp.