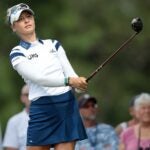 It could be argued that no one is playing better golf at the moment than Nelly Korda. With back-to-back wins in her last two LPGA starts — including her first major title at the KPMG Women’s PGA Championship — Korda has taken her game to new heights this season with a mix of old and new gear that’s played an important role, both on and off the course.

During a recent interview with GOLF’s Fully Equipped podcast, Korda discussed her throwback gear tendencies, the role her sister (Jessica Korda) played in a recent putter change and much more. Below are some of the highlights.

Nelly has a special bond with her sister that extends to the gear in her bag, including a Scotty Cameron Special Select Squareback 2 putter that recently went in play prior to her first major win at the KPMG Women’s PGA Championship.

“I’ve had that Newport 2 since my rookie year and had all my wins with it, so I was kind of hesitant [to change],” Nelly Korda said. “But my sister had that Squareback and I really liked the look of it, but she has it in a silver finish. I like a black finish. So I texted the people at Scotty Cameron and was like, ‘Hey, can I get that Squareback.’ Right as I started practicing with it, I noticed how much easier it was to line up. It’s not even that big of a difference from the Newport 2.”

Having a sister with similar gear preferences isn’t a bad thing — more on that in a moment — especially when the change leads to a major victory.

If there’s anything that can be gleaned from Nelly’s recent change, it’s that mallet models with blade tendencies exist in the marketplace. If you don’t want to go full-on mallet, consider the idea of taking a page from Nelly’s book and using a wide-body blade like the Squareback. It offers a slightly more stable head with a similar blade look and feel.

If you’re reading this and happen to be the younger sibling, there’s a good chance you copied your older brother or sister a few times. Nelly admitted she’s done her fair share of copying over the years. That’s extended to most of the clubs in her bag, with the exception of the hybrid. For Nelly, she needs a club that offers a higher launch, while Jessica prefers a more traditional long iron.

“We have such a similar bag,” Nelly said. “The only difference is I have a hybrid and she has a 4-iron because she hits it a little higher. I’m a little bit of a copycat in the sense. She leads the way and I follow. Growing up I had all her hand-me-downs. The thing is, it works for me, so why not copy her.”

If the recent putter switch is any indication, Nelly will continue to keep tabs on big sister’s bag setup for the foreseeable future.

Arguably the most surprising revelation during the interview, Nelly admitted she never used a launch monitor until just prior to her major win when she finally broke down and bought one.

“I’m a feel-based player and actually just got a launch monitor about two weeks ago,” Nelly said. “I was against it and didn’t want to get too much into the technology. I want to see the shape I like to see. I like to go on the course and hit different shots to see if I can thread it through everything on a tight course. I like to do my testing on the course.”

In an age where nearly every pro uses a launch monitor in some form or fashion, Nelly is a throwback to a bygone era where testing was done without access to real-time data. What’s interesting about the timing of her recent launch monitor acquisition is it just so happens to coincide with back-to-back wins.

“I can use it to my advantage,” Nelly admitted. “Obviously, I don’t have to get too wrapped up in the numbers. Although, I do get a little worried because when I do get something new, I go hardcore. I have to limit myself a bit. I usually look at swing path, carry, total and face angle.”

Don’t expect Nelly to rattle off her driver specs on command. Like many feel players, Korda relies on a team to put her in the right place. If something feels off with a club, she’ll ask questions. But there are also times when she leans heavily on the experts to tell her when something might be amiss.

Take a recent conversation she had with Vokey Tour rep Aaron Dill about her 58-degree lob wedge.

“I didn’t know anything growing up,” she said. “I was just told what I need to do and what I need to hit, and I just hit it. Going to the factories, I’ve learned about certain things, like how my wedges should react and what my peak height should be. I mean, I did some extensive work with [Vokey wedge rep] Aaron Dill on my wedges and learned my 58-degree wasn’t spinning too much and going too high. Just kind of knowing the little details is super cool.”

Even if you don’t have access to Dill, you should still lean on experts — be it certified club-fitters or instructors — to keep things on the rails. Nelly’s recent work on her wedges is a great reminder that even strong feel players can miss things on occasion.

You don’t have to be a single-digit stick to learn something from the way Nelly operates on the course. Instead of loading up on several swing thoughts before a round, follow Nelly’s lead and narrow it down to one that can serve you well for all 18 holes.

“My tendencies are I get really long with my swing and my body gets out of sync,” she said. “On the downswing, I’ll kind of lift up my shoulder and won’t move with my arms, and then I start hitting it out to the right. My swing thought is shoulder to chin. It’s simple and is a way to keep my swing short. It’s been working for me quite well.”

It’s easier said than done, but sticking to a single swing thought can free up your mind and allow you to focus on the shot at hand. Give it a try the next time you play.

How to rock a golf skort in 3 lengths: mini, mid-thigh and knee-length