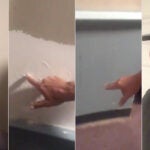 Here's hoping Geno Bonnalie has better luck caddying at Winged Foot than he did finding a place to stay.

Not everyone stays on a yacht or in a five-star hotel during major championship weeks. Most players actually get rental homes. That’s what Geno Bonnalie, the caddie for Joel Dahmen, tried to do for this week’s U.S. Open at Winged Foot — but his plan backfired terribly.

Bonnalie tweeted a two-minute video on Monday night with the text: “When your Airbnb cancels on you the day you arrive to the US Open:” and then took his 15,000 Twitter followers on a tour of his last-minute motel/hotel he grabbed in the Mamaroneck, N.Y., region.

Bonnalie called it “Caddie Cribs: Major Championship Edition,” and detailed some less-than-ideal room accommodations in hilarious fashion. (Hey, at least he was a good sport.)

He pointed out the shoddy patch work in certain corners of the room, investigated what he thought were bullet holes in the wall and bragged about his six-ounce Mr. Coffee. Things weren’t much better on the floor.

“If you look down below here, I think we have some blood splatter,” he said.

The sink also had some questionable caulking, so there was a shower rod supporting it. “It is not stable,” he said. “In fact, it moves quite easily, so I think if I accidentally bumped that I could break a toe.”

Bonnalie’s video was shared by hundreds of people on Twitter on Monday night and it’s been viewed almost 700,000 times. Check it out below.

Bonnalie posted an update on Tuesday morning, saying “I survived the night, with minimal itching, and the smell of cigarette smoke combined with urine in the corner made me nauseous enough where I was able to pass out and get a solid four-ish hours.”

The good news for Bonnalie is that Twitter came to his rescue. Lots of people commented saying they had a place for him to stay or could help out, but he said he had things figured out and should be at his new place beginning Tuesday night. Good luck, Geno — with the rental and the golf.