2021 Genesis Invitational live coverage: How to watch Round 2 on Friday 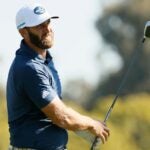 Dustin Johnson got off to a hot start at the 2021 Genesis Invitational on Thursday.

Only 18 holes remain to determine who will miss the cut and who will remain to play the weekend at the 2021 Genesis Invitational. Here’s what you need to know to watch the second round.

World No. 1 Dustin Johnson has been on a hot streak lately, even for him, and the momentum continued on Thursday at Riviera. Johnson fired a three-under 68 in the first round, leaving him up near the top of the leaderboard and setting him up for a run at another win. That’s been the norm for DJ recently, as he’s won in two of his last three starts.

For Friday’s second round. Johnson will tee off later in the day at 2:54 p.m. ET (11:54 local time). He’s playing alongside defending champion Adam Scott (two under) and Bubba Watson (even).

How to watch Genesis Invitational Round 2 on TV

Golf Channel will air the second round of the 2021 Genesis Invitational with four hours of coverage from 2-6 p.m. ET on Friday.

How to stream Genesis Invitational Round 2 online

You can stream the second round of Golf Channel TV coverage of the 2021 Genesis Invitational on golfchannel.com. Fans can also view Featured Group coverage of the opening round all day Friday via PGA Tour Live with a subscription.