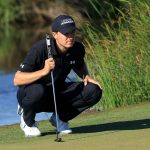 Jordan Spieth shot a one-over 73 in the first round of the PGA Championship.

KIAWAH ISLAND, S.C. — Today, in This Week in Spieth, we bring you the story, in all its heartbreak and joy, of what young Jordan Spieth — still just 27 despite his many miles — did in the first round of this exciting PGA Championship.

OK, maybe you’re already annoyed. Maybe you want to know why there is not a feature here called This Week in Keegan or This Week in Rory.

When Mr. Bradley has three legs of the career grand slam, instead of just the one that he enjoys, he may get similar TWI treatment.

Likewise, Mr. McIlroy, at next year’s Masters, may get the TWI treatment, for he will again be pursuing the completion of the career grand slam, something achieved by Gene Sarazen (though he wasn’t aware of it at the time), Ben Hogan (ditto), Gary Player, Jack Nicklaus (did it three times) and Tiger Woods (also a three-time CGSer).

But at this 103rd PGA Championship, here at the Ocean Course, there is only one player who can complete the career grand slam, and that, you may know, is Mr. Jordan Spieth, your reigning Texas Open champion. He also won the 2015 Masters and U.S. Open and the 2017 British Open. The Open Championship is always played, to use a traditional phrase, “in sight and sound of the sea.” The course the fellas are playing this week, to use the shorthand style used on certain baseball caps being worn here, is called OCEAN. It’s on the Atlantic Ocean. It has some spectacular views. The ocean, as a water hazard, doesn’t come into play but the wind off it does, or it did on Thursday.

Spieth and Simpson, at times, walked way ahead of Zalatoris, as he had to wait for greens to clear that they did not. They all did what they could.

After Willie Z. holed out a 122-yard downwind lob wedge shot for an eagle on 6, Spieth fixed his fellow Texan’s ball mark for him. Nice gesture and it couldn’t slow play.

“Thanks for teaching me that shot,” Zalatoris said to Spieth.

They’ve logged a lot of rounds together in Dallas, first as kids and now as young men. Zalatoris is 24. He went to Wake Forest, as did Simpson, but Thursday was the first time they had ever played together.

Earlier in the round, when Zalatoris’ tee shot finished almost leaning against the leg of a marshal’s folding chair, the rookie called in a rules official. “Just mark it,” Spieth said, kindly. If the ball moves while moving the temporary movable obstruction, you move it back. No big deal. Zalatoris moved the chair and not the ball. It was easy.

OCEAN (that is, Pete Dye’s Ocean Course at the Kiawah Island Resort) is on a sprawling property, and to get from the clubhouse to the first tee, Spieth and his caddie, Michael Greller, took a cart for the half-mile trip there. They sat in the back row, facing backward, and encouraged some stragglers, also heading to the first tee, to hope aboard. On the road to the first tee — there are two main paths there — you pass posters showing the smiling faces of various 21st century PGA winners. You make a left-hand turn at Y.E. Yang (2009) to get to your destination. You know what they say: between Yang and Spieth, you have the career grand slam.

Zalatoris hit a bad slice off the first. Spieth helped him find it. Spieth drilled his. The joy.

Zalatoris shot 71, one under.

Spieth shot 73, with a near-miss on the last. (The heartbreak.)

But only one of them can complete the career grand slam this week.