Days after being tossed from a cart, Cristie Kerr contending at the U.S. Open 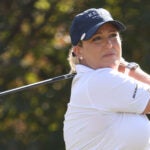 Cristie Kerr hits her tee shot on the 12th hole during Thursday's first round of the U.S. Women's Open.

Cristie Kerr birdied the 3rd hole at the Jackrabbit Course at Champions Golf Club. She birdied the 10th hole to get to one under during the first round of the U.S. Women’s Open. Kerr dropped a stroke on the next hole, but would finish with an even-par 71. After Thursday, she’s tied for 24th and four shots behind leader Amy Olson.

On Monday, Kerr said, she would have thought you were crazy if you told her she would even be playing, let alone actually contending.

Before last Friday’s second round of the Volunteers of America Classic, Kerr and her caddie were each thrown from a golf cart in a collision involving another cart. Kerr, according to Golfweek, dislocated three ribs and suffered knee, arm and hand contusions; her caddie, Matt Gelczis, who was on Kerr’s bag for the first time that Thursday, “just got a bump on the head and got only whiplash in his neck,” Kerr said.

Six days later, she was playing in this year’s final major. “This is my favorite tournament. It’s our national championship,” said Kerr, who’s using her former caddie, Brady Stockton, this week as Gelczis is back at his home in Philadelphia recovering, according to Golfweek. “I feel like we’re so lucky to play it with Covid that I just love it. I just, I mean, I’ve been up at 4 in the morning icing. If there is any way possible, I’m not going to miss this tournament.”

Monday, she thought she would. The pain, on a scale of 1-10, was an imperfect 10. Tuesday, she chipped and putted at Champions. Stockton then convinced her to a 60-yard shot.

“I skulled two of them over the green because it hurt so bad,” she said.

“I was like down in the dumps and dejected, and he’s like, ‘Stay positive.’ These are weird injuries. So that afternoon, after some food, I took some medicine, and I was able to get up to like three-quarter 7-irons on the range.”

“So like I’m pretty tough, but, yeah, it’s the chest and the ribs,” said Kerr, who at 43, is the oldest player in the Open field. “It moves around depending on where – like, the first four or five days, like, I had such a sharp pain in my left chest and in the back I couldn’t even like hardly get out of bed.

“Then it started moving to the center, and then, like, as I was starting to swing, it moved around, so it’s, like, everywhere, and I just don’t where it’ll pop up next, but as long as I keep moving in the rounds like and don’t get cold, it seems to be manageable.”

Kerr said she doesn’t remember much after last Friday morning’s cart collision. Before, “I swear to God we were being careful.”

“It was pitch black. No lights,” she said. “There was a cart that was rounding the corner from the range, and I could see that, because that cart had headlights and our cart did not. I was using the flashlight to lead the way. We were going three-quarters of the speed. We were, like, both out making sure we were on the path, and had to move over just a touch left to miss the other cart coming our direction. We just hit this thing smack on.

“We were both thrown from the cart, and I just, I can’t remember. I remember landing, I remember the impact, and – I’m sorry.”

She became choked up.

A few minutes later, after a few more questions, she cut her interview a bit short. Kerr had another therapy appointment.