Twitter is freaking out about Tiger and Charlie Woods’ mesmerizing warmup 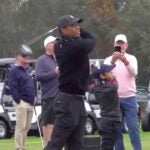 As you may have heard, Tiger and Charlie Woods are playing golf together this week.

The father-son duo is competing in this week’s PNC Championship in Orlando, Fla., alongside the likes of John Daly, Annika Sorenstam and Gary Player. The event’s atypical structure means father and son won’t begin tournament play until Saturday, but we got our first look at the two in action at Thursday’s pro-am.

Tiger and Charlie made it on site at the Ritz Carlton Golf Club just after 9 a.m. ET and headed to the range. By 9:30, videos of their mesmerizing warmup were trending on social media. (One video tweeted by the Champions Tour is already nearing two million views.)

We’ve still got another three days of action from the PNC Championship, but it seems young Charlie Woods has already made his mark on golf fans. Check out some of the reaction below.