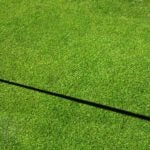 A three-footer for the win — relatable anxiety for any golfer.

One of the oddest virtues of golf is that we feel what they feel. There’s the divide in skill but not much else. I speak of the rising heat, spikes to throat, after a flubbed shot. The passing ecstasy that greets some kind of success. The intense disappointment of a chance that will not come again.

When Doug Sanders died earlier this year, it brought to mind the three-footer he needed on the last hole of the 1970 British Open at the Old Course to win. He missed — low side, of course — and lost an 18-hole playoff to Jack Nicklaus the next day.

We’ve all been there, right?

Not exactly there, but close enough. We can relate. The shoved putt, the fat chip, the thin bunker shot. Your regular game is one thing. That matters, but it’s casual. Here we address the high-stakes stuff. Club championships, member-guest events — something with hardware on the line, or paint. Their Ryder Cups are our clubby get-togethers. They are almost the same, despite the allocation of handicap strokes, the flighting by ineptitude, the goofy putt-offs and the rest.

All the emotion stems from this foundation: this matters. Part of Nicklaus’s genius was that every shot mattered. Tiger is the same way. At a member-guest, you’re on a team. You have the chance to lift the other person, or let your partner down. If you don’t care, check your pulse.

Golf provides vast opportunity to handle disappointment, but in the wake of defeat the game reveals character with ruthless efficiency. I was rooting for Francesco Molinari at last year’s Masters for any number of reasons — you couldn’t meet a finer person — but one of them was to see how Tiger, the evolving Tiger Tont Woods, back to golf after a lengthy period of exile, handled close-but-no-cigar. Nicklaus, you likely know, had 19 second-place finishes in majors. That refrain is sung every time a corner-bar crooner lapses into The Ballad of Big Jack. All that losing.

One of my favorite Tiger moments came after the 2007 Masters, when he finished two shots behind the winner, Zach Johnson. The Easter Day course setup was brutal and nobody could make a move. A reporter asked Woods what he thought about the hole locations and the rest. “I don’t care, as long as I come out on top,” Tiger said. One of the most naked and unadorned things I have ever known him to say. He was pissed and wasn’t pretending to be otherwise. But there was an element of graciousness there, too. He was, at the very least, continuing custom, by answering reporters’ questions whether he wanted to or not. Golf comes with a lot of expectations, handed down, one generation to the next.

On a side note here, consider the composure the players show, talking to Roger Maltbie or Steve Sands or whomever in the wake of close-but-no-cigar. Right off the green, to a waiting mic. It’s astounding, really, how well they do it. It’s a learned behavior. Golf will grow you up.

I have always thought it said something good about Phil Mickelson that he showed up at the awards ceremony at Winged Foot, at the last U.S. Open there, in 2006, in the agony of another second-place finish. Or maybe his presence said more about the two others who finished one shot back, Jim Furyk and Colin Montgomerie, and failed to show. Jack showed.

At the 1989 Masters, Scott Hoch had a two-foot putt to win. This was on the first playoff hole. It did not go in. His life was changed from that day on. Had it gone in, he’s in the club forever. I’m not saying whether that’s a better life or not, but it’s different. Hoch did not choke, not in this reporter’s estimation. I don’t use the word. Something went wrong. Maybe he cared too much.

Team events raise the stakes exponentially. There is no photo in the long, rich history of golf photography that shows agony more rawly than the one that depicts Bernhard Langer missing a six-footer — last man, last hole, last day — that would have meant a European win in the 1991 Ryder Cup. Oh, the humanity. Eleven teammates, one captain, your caddie, your family, your fellow Continentals. They all wanted that putt to drop. But it would be inaccurate to say he let them down. You can’t let somebody down if you’re trying your best.

The other day I was playing in a member-guest, on the guest side of the ledger. How many people could not care less? About 7.8 billion, give or take. I mean, there are other things to worry about, right? These days even more so. And yet I proceed, because I know you’ve been there.

It was a three-day event, simple knockout style. To win your flight, you had to win three straight matches, that’s all. We won our first match. We were one up on 18 tee in our second match but lost that hole. We went to the first tee, a short par-4. No shots on the card.

My partner drove it well, his second shot was short, he pitched it well, missed his 10-footer for par. The other team was already in for 4. I drove it well, hit a solid second, was surprised to see it about 30 uphill feet short of the hole when I got to the green. Uphill when it matters is an easy time to leave a putt short. I caught the first putt right on the face and watched it go a yard and change past the hole. Before long, I was the only player left.

I go righty long and lefty short, generally speaking. Yes, two putters and sometimes I am between them, as another player is between a 6-iron and a 7.

If I could make the three-footer, we would go to a second playoff hole. If I miss, the day and the event are both over. I want it for myself, for my host, for our caddie. So that we might gather for another day of meaningful golf.

What are we talking about here, beyond bragging rights? I don’t know the answer. Tiger says he hates losing more than he likes winning. I can’t relate. I can relate to the idea of trying to do something competently.

The three-footer was downhill and left to right. A hook putt, for a lefthander. (I like!) The flagstick was required to stay in, in deference to the pandemic. The foam donut in the cup could possibly keep a good putt out. I wanted to putt the ball with some pace, keep it in the hole, use the flagstick as if it were a croquet stake, if necessary.

My lefty putter is a beautiful TaylorMade, modeled after the classic Ping Anser 2. It came with an aiming line on its bottom ledge. In St. Andrews two years ago, at one of the golf shops near the Old Course, I had a second line added, on the top, and when the two lines line up the face is square to its intended line. The intended line on a short putt is not that complicated. All you have to do is make a good stroke. That doesn’t sound too hard, does it? Tell that to Doug Sanders and millions of others.

My best guess is that I got scared by the putt’s speed on the downswing and failed to accelerate through the ball. I pulled it. You already know what happened. The ball tickled the right side of the cup, spun right, stayed out.

I fell into a catcher’s squat, moaned, I’m sure, stood and doffed my cap to the winners. (No shakes, of course.) I had blown it. My host could not have been more gracious, but the emptiness within was almost overwhelming.

The next morning, the sun did come up. The feeling of emptiness was not as intense. I’ll have other putts, but I’ll never have another crack at that one. The moment has come and gone. That’s golf.

It is trite, but true, to say that you win some and you lose some. I don’t think it’s trite to say that you learn more from losing than winning. Here’s a quickie: Maintain Speed. That common freeway sign has broad application. I learned that, on that 19th hole. I also learned that a good partner will be right there with you on the first tee, and closer yet when it’s over, no matter how it plays out, pandemic be damned.

This golf is some kind of game, don’t you think?