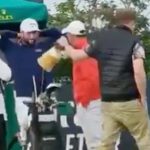 A fan grabs Rory McIlroy's headcover at the Scottish Open on Friday.

A fan nonchalantly walked onto a tee box and took a headcover and golf club from Rory McIlroy’s golf bag during the second round of the Scottish Open on Friday at The Renaissance Club.

McIlroy was standing on the 10th tee box, his first hole of the day, waiting to start his second round with playing partners Jon Rahm and Justin Thomas when a man casually walked onto the tee box and stopped at McIlroy’s golf bag.

A video that circulated on social media captured the moment. McIlroy was standing on the tee and chatting with caddie Harry Diamond and Rahm when a man strolled up and grabbed McIlroy’s trademark St. Bernard headcover and kept walking. He then stopped, went back to the bag, looked through it for a second and then took out an iron before walking to a corner of the tee box.

According to The Scotsman‘s Martin Dempster, the man had accessed the tee box undeterred from about 30 yards away, the closest fans could get to players at the 10th tee. The man stood with the club for about 30 seconds before security stepped in and escorted him off.

According to the European Tour, the man is in the custody of the police.

McIlroy followed a one-under 70 on Thursday with a 71 on Friday. He’s one under for the tournament and in danger of missing the cut.