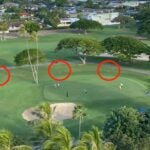 The 18th hole at Waialae Country Club, host of this week’s Sony Open in Hawaii, is a short par-5 — especially by PGA Tour standards. Playing at only 515 yards long on Thursday, the dogleg-left hole should present a relatively straightforward birdie opportunity. But this year, No. 18 is sporting some extra accessories. Eagle-eyed viewers may have noticed a new addition on the left side of the 18th hole that hasn’t been there during the tournament before: O.B. stakes.

Internal O.B. is rare enough on the PGA Tour, but these stakes are particularly interesting because they are temporary. According to reports from onsite media, the stakes were added on Wednesday evening. Golf Channel’s Todd Lewis tweeted that the stakes were an 11th-hour decision because officials believed tee shots from 18 that were headed into the 10th fairway would jeopardize the players on that hole.

In addition to protecting the players on No. 10, the stakes also add additional intrigue to the hole. Without the stakes, you could easily bomb a drive over the trees to the left of the 18th tee into the 10th fairway — a strategy some players employed as recently as last year.

As you can see in the photo above, if you can clear the trees to the left, there isn’t much stopping you from setting up a potentially great look at eagle from the 10th fairway, as Golf Channel commentator Mark Rolfing noted.

Rolfing brings up another interesting point: Without spectators and the grandstands that are constructed to accommodate them, the hole looks very different this year than it has in years past.

Despite the last-minute changes, the field appears to have taken the new stakes in stride, with No. 18 playing as the second-easiest hole on the golf course, trailing only the 501-yard par-5 9th.