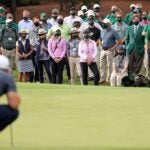 ESPN's documentary chronicling the November Masters proved not even Augusta National escaped reflection in a turbulent 2020.

Not even Augusta National escaped the wrath of 2020.

That’s one of the key takeaways from The One in November, the new documentary from Augusta National and Boardwalk Pictures that chronicles the lead-in to the most bizarre Masters in decades: the November 2020 edition.

The film, which debuted on ESPN Tuesday evening, is just 30 minutes long, hardly enough time to properly explore the depth and complexity of the challenges that faced the tournament and its many stakeholders. But The One in November still does a commendable job of casting new light on a club that has a well-documented affinity for secrecy.

For so much of its history, Augusta National has presented publicly as golf’s castle on a hill. Lost in the hagiography is the very real work that powers the crafting and maintenance of ANGC’s reputation.

The film portrays the Masters as the product of months of planning and effort rather than as a preternaturally impeccable haven of golf that simply exists; an up-close look at the horticultural team planting flowers on Magnolia Lane is but one indicator of the massive upkeep required to keep Augusta National looking like, well, Augusta National.

The filmmakers also depict the club’s uncertainty around staging a major championship in the midst of a pandemic, as well as its desire to rewrite its own complicated history on race against the backdrop of the national awakening after George Floyd’s killing in June.

The One in November spends considerable time on Augusta National’s efforts to honor Lee Elder, the first black golfer to compete in the Masters in 1975. In November, chairman Fred Ridley announced that Elder will serve as an honorary starter in 2021, officially marking the creation of the Lee Elder Scholarships at Paine College, a Historically Black College and University in Augusta.

“It was not ‘what we did,'” an Augusta National representative says in the film. “But what can we do?”

The producers at Boardwalk Pictures — a production house responsible for Netflix’s award-winning shows Last Chance U and Chef’s Table — were given unparalleled access to Augusta National, including the vaunted Champions Dinner. Viewers learn that Tiger Woods’ 2020 dinner was moved from its customary room in the Augusta National clubhouse to allow for proper distancing measures.

In another scene, Jack and Barbara Nicklaus greet Gary Player as the two golfers warm-up for the ceremonial opening tee shot under the lights on the Augusta practice range.

“I’ve never had anybody kiss my caddie in the morning,” Jack says with a laugh after Gary and Barbara embrace.

ESPN Masters host Scott Van Pelt offers much color into the tournament and how it comes to life; while a host of players offer their insights, including Woods, Cameron Champ, Gary Woodland and Ian Poulter.

While the film is likely too small in scope to alter the Masters narrative in any significant way, it’s fascinating to peek behind the curtain of the famously cloistered club. In that respect, the film could be considered an outlier in its portrayal of Augusta National, even among projects in which the club has no editorial control.

The film will live on the ESPN family of networks (ESPN, ESPN2, ABC) for the next several weeks, before transitioning to streaming on ESPN+ and Masters.com beginning on April 4.