‘You early walked it like Kevin Na’: Max Homa holes out for eagle 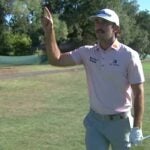 Max Homa raises his arm after an eagle at the 12th.

Max Homa needed to catch Maverick McNealy. The 12th and 13th holes helped. Homa, playing in the penultimate pairing at the Fortinet Championship at Silverado Resort and Spa in Napa, Calif., went eagle-birdie on 12 and 13 to tie McNealy for the lead.

On the par-4 12th, he had just 95 yards remaining for his approach, and from a flier lie from the rough he needed to land his ball short of the hole and let it run out. His plan worked perfectly. His ball turned hard at the end, clanked off the pin and fell in.

Homa’s caddie, Joe Greiner, was well ahead of him by the time the ball went in. “It looked like you early walked it like Kevin Na,” Homa said as he caught up to him, referring to Na’s trademark putting move.

The hole-out got Homa to 16 under, one back of McNealy, and he tied McNealy when he made a 21-footer for birdie on the 13th. Homa later held off McNealy and won by one.