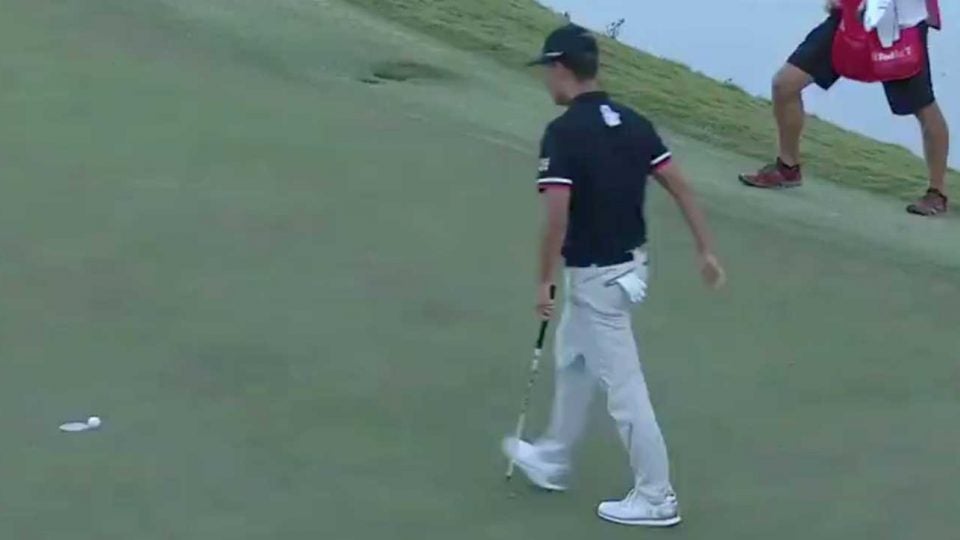 Kevin Na walks in a birdie putt on the first playoff hole of the Shriners. He won the tournament on the next hole.
@PGATour

Kevin Na didn’t do himself any favors on the back nine of regulation on Sunday at TPC Summerlin. Trying to win the Shriners and claim his fourth career PGA Tour victory, Na made a triple bogey on the par-4 10th and then splashed a ball in the water on the par-5 16th and made bogey.

Luckily for him, he still managed to shoot 70 and tie Patrick Cantlay to force a playoff, which he later won. On the first playoff hole, the par-4 18th, both players hit there approaches close, and Cantlay got things started by rolling in his birdie putt. Na, from 9 feet, 5 inches, needed to make his to keep the tournament alive — and he answered. Check out the putt below, and take a moment to appreciate Na’s early (and confident) walk toward the hole. He took two full steps before the ball dropped!

“There was no doubt we were going to go extra holes, and I walked that thing right in,” Na said afterward.

Now, Tiger Woods may have made this practice famous, but Na’s no slouch in the category, either. Check out this Skratch compilation of Na’s greatest walk-in hits:

The early walk to extend the playoff. That’s the Kevin Na we know and love. pic.twitter.com/7jJaUlsgxH

As you can see, he’s been doing it for quite some time. You might even remember Woods poking fun at Na during last year’s Players Championship.

Who knows if Woods was watching on Sunday, but he had to be proud of Na’s confident form. And don’t forget, it’s Woods who is making some Presidents Cup captain’s picks in the next month or two. Na’s resume got a nice boost this week, especially with his 558 feet, 11 inches of putts made, a new ShotLink-era record on Tour.