DJ, Fleetwood get hot and what else you missed in Round 2 of the Saudi International 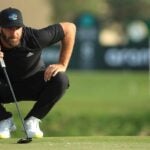 Dustin Johnson reads a putt during the second round of the Saudi International.

While you were sleeping, the second round of the Saudi International kicked off at Royal Greens Golf and Country Club, although this time some pesky weather got in the way. Here’s what you missed.

The elements came into play on Friday. Heavy rains fell down on the course and the morning scoring average was more than three strokes worse than Thursday’s morning average. The tournament was eventually suspended before many players teed off for their afternoon rounds. The delay lasted about two hours.

First-round leader David Horsey, who opened with a 61, played 12 holes in two over on Friday (he didn’t finish) and fell down into a tie for seventh. Several players weren’t able to finish their second rounds, and those players will resume early on Saturday morning. Round 3 will use a two-tee start to get the tournament caught up.

Tommy Fleetwood and Ryan Fox had the low rounds of the day on Friday, as both shot five-under 65s. Dustin Johnson, Justin Rose and Kevin Na are also all five under on their rounds, and all three have a few holes remaining in their second rounds.

Fox and Stephen Gallagher are tied for the lead at 10 under. Johnson is two off the lead at eight under.

Some putts aren’t always as bad as they seem.

Tony Finau is T12 at six under (two holes left in his second round), Phil Mickelson is five under, Bryson DeChambeau four under (four left) and Patrick Reed, fresh off his win at the Farmers Insurance Open, followed his Thursday 69 with a 70 on Friday. He’s one under overall.