‘It’s hard to talk’: Dustin Johnson gets choked up at emotional Masters ceremony 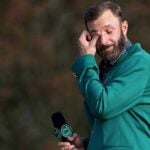 Dustin Johnson has a gift.

Well, a gift other than the one he displayed for four days and 72 holes at Augusta National. It might sound insulting, but rest assured, this gift rivals the impressiveness of his boundless capacity as a golfer.

Every week, Johnson steps onto the course an artist, an assassin, a flamethrower — overflowing with jaw-dropping, shot-making brilliance. And every week, Johnson steps up to the podium, faces a group of professionally trained question-askers, and speaks for an extended period of time without saying anything of substantial intrigue.

Over the span of nearly two decades in professional golf, perhaps Johnson’s most publicly recognizable personality trait is the absence of one. While Rory McIlroy expounds in stunningly introspective paragraphs, Johnson speaks in terse, worn clichés. Week in and week out, win or lose, DJ exercises his gift to the chagrin of those paid to make him sound interesting.

As per usual, Dustin Johnson said very little. But on this day, the silence spoke volumes.

“If you could tell the younger you, don’t worry, the green jacket will be put on you for your second major,” CBS reporter Amanda Balionis asked. “What would you say?”

Johnson looked down at the Augusta National logo emblazoned to his chest, the spoils of a record-shattering 20-under performance.

“I definitely wouldn’t believe myself,” he said. “It’s a dream come true. As a kid, you always dreamed about being a Masters champion.”

“It’s hard to talk,” he said, wiping tears from his eyes.

He paused and sucked in a deep breath, steadying himself.

“But, you know, it’s just incredible,” Johnson said, as the tears once again welled in his eyes. “Obviously, as you can tell. Sorry.”

He tried again to continue.

“I’ve never had this much trouble gathering myself,” he said. “On the golf course I’m pretty good at it, out here I’m not. I’ve put in a lot of hard work. I’ve got a great team, who…”

His voice trailed off, and he wiped his eyes again.

So CBS let him be.

“I think that’s one of the greatest things I’ve ever seen from Dustin Johnson, right there,” Jim Nantz offered. “You get so many people that question what’s inside players’ hearts. So easy these days to post a thought, or a comment on some site or social media. And people feel good about themselves for trying to tear down these talented people who work so hard and the fire that’s inside of him, you just saw it right there. That was just a reflection on just how much it meant, how hard he worked for it.”

Nantz’s words spoke eloquently to the moment, but he didn’t need them.

Dustin Johnson hadn’t said much, and for once, he’d said everything.