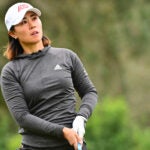 Sunday’s final round at the Tournament of Champions finished how most fans expected: An American star lifting the trophy, starting off her 2022 LPGA season in style.

It just wasn’t the American star most people expected.

Danielle Kang was T2 entering the day, a shot behind World No. 1 Nelly Korda. But Kang rode a red-hot stretch in the middle of her round into the lead and never looked back, leaving Korda and the rest of the field in her wake.

In the end Kang’s final-round four-under 68 got her to 16 under for the week, three shots clear of runner-up Brooke Henderson. Gaby Lopez finished third at 12 under, while Korda faded to T4 at 10 under alongside Celine Boutier.

The three-shot final margin looked like a dominant victory, but the result wasn’t always so certain. Korda entered the round with a one-shot advantage, the top ranking in the world and a gold medal to her name. In other words, she was the betting favorite. But she started slowly in the chilly Orlando morning. When she made bogey at the par-3 fourth hole, she lost the lead. Up ahead, Gaby Lopez made birdies at 5, 6 and 7 to seize that position for herself.

Sunday’s conditions were tough; scores rose as temperatures dropped, and bogeys came easy as the day wore on. Korda made another at No. 10 to fall further off the pace. Lopez made four bogeys in her final 10 holes. But Kang was just getting going. She made birdie at the par-5 ninth, then another at the par-5 11th, showing off her arsenal of short-game shots. Then she added birdies at 13-14-15 for good measure. The lead grew.

The final three holes at Lake Nona were playing as the three toughest, and Kang settled for bogey at No. 16. No worries; she’d built enough of an advantage that an up-and-down for par at No. 18 was relevant only in terms of preserving the final margin of victory.

The win was the sixth of Kang’s career but her first since 2020, when she won the LPGA Drive On Championship and the Marathon LPGA Classic in back-to-back events.