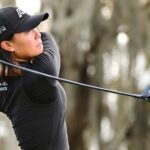 Danielle Kang hits a shot during the first round of the Hilton Grand Vacations Tournament of Champions on Thursday in Orlando.

It was a successful season-opener for Danielle Kang. Not only did she shoot a four-under 68 to grab a share of 2nd place in the Hilton Grand Vacations Tournament of Champions, but she also picked up some money to tip the valet.

Kang was three under when she got to the 18th at Lake Nona Golf and Country Club in Orlando on Thursday, and her birdie on the par-4 allowed her to take cash from MLB veterans Greg Maddux and Mark Mulder.

The tournament is reserved for LPGA winners from the past two years, and they’re grouped with celebrities throughout the week. In Round 1, Kang had Maddux and Mulder, two former star pitchers who also happen to be sticks on the golf course. (At last year’s American Century Championship, Maddux was a 4 handicap and Mulder was a 0.5.)

So how did Kang get the dough?

It was a comfortable grouping for Kang, who had played with Mulder before and knows Maddux since they both live in Las Vegas and run into each other at TPC Summerlin.

“It was really fun,” Kang said. “They’re super nice, super cool guys. I told Mark that he’s so tall, I haven’t played with this tall a person in a while. Any time he went to mark the golf ball I thought I was out of way but I’m about to get kicked because of the range. I was like, Okay, I need to step further away. So it was kind of fun. Just an easygoing week. Try to stay focused on my game and never forget to have fun with the celebrities you’re playing with.”

Gaby Lopez shot 67 to take the first-round lead. You can follow the rest of the action here.