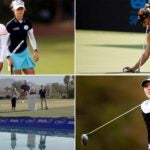 Here are some players to watch, tournaments to tune in to and storylines to follow during the 2022 campaign.

The LPGA Tour’s short offseason is over and the 2022 campaign is upon us. The ladies kick off the season this week at Lake Nona, and over the next 11 months they will trek across the globe for 34 events and five majors with millions of dollars worth of prize money at stake.

With a slate full of superstar players, compelling storylines and interesting characters coming up, it’s time to get geared up for the season ahead. Here’s everything you need to know, delivered through 10 burning questions, answered and explained.

Lexi Thompson has been a household name in women’s golf since she turned pro at the age of 15(!) in 2010, and she’s put together a solid career in the time since. She’s won 11 times on tour, earned a major victory in 2014, and won the season-long Race to the CME Globe in 2017, all while being a fan favorite who’s constantly in the spotlight.

But while her curriculum vitae is impressive, Thompson has left some meat on the bone that could’ve considerably beefed up her trophy room. Close calls have haunted her in recent years (see: 2017 ANA, 2021 U.S. Women’s Open) and heartbreak has become all too common.

After winning in all but one season in the 2010s (2012), the 26-year-old has yet to win this decade. Thompson’s last win came at the 2019 ShopRite Classic, and her drought is nearing the three-year mark. That’s not to say her game has fallen off a cliff, though. Thompson has steadily been a fringe top-10 player in the world of late, she’s just not taken home a trophy.

Will 2022 be the year Thompson breaks her mini drought? Past performance says she’s too good a player to go this long without a win, but golf is a fickle game.

2. How will Mollie Marcoux Samaan fare as commissioner?

At this time last year we were asking who would be following in the footsteps of outgoing commissioner Mike Whan. We know now that Mollie Marcoux has been tasked with taking over for a legend as she leads the LPGA Tour after her stint as athletic director at Princeton. Our question this time around is, how will she fare?

Marcoux Samaan has already outlined her vision for the future of the tour (chiefly, that the women are well taken care of financially), and purse bumps and new sponsorships will certainly help with that. But the gap between the women’s and the men’s game is still wide. Shoring up that chasm and continuing to get eyeballs on the tour will be paramount for her success.

The good news for Marcoux Samaan is that there is tons of momentum behind her as she begins her first full calendar year at the helm. Enhanced investment in the sport, as well as a young American superstar to be the face of the tour give her plenty of wind in her sails for 2022. Now, she’s just got to capitalize on the momentum.

3. Who will take the last leap into Poppie’s Pond?

The LPGA Tour will pen the final chapter of its history at the Dinah Shore Tournament Course in 2022 as the first major of the calendar year (now known as the Chevron Championship) will be played for the final time in the Coachella Valley. With the championship being relocated to Houston in 2023, this marks the final year that the winner of the year’s first major will make a leap into Poppie’s Pond.

Who will make that historic final jump? Nelly Korda and Jin Young Ko are the safest bets, but could it be a rookie like last year’s winner Patty Tavatanakit? A seasoned veteran such as Stacy Lewis? The comeback kid, Lydia Ko? No one can say for sure, but it’s certain that whoever makes that leap will go down in LPGA lore.

Nelly Korda was hardly an unknown quantity heading into the 2021 season, but no one expected her to dominate in the fashion that she did. Korda won five times during the calendar year — including a major and a gold medal — and ascended to world No. 1, becoming the face of American women’s golf in the process. Now, she’ll try to replicate that success.

The 23-year-old has proven she has the game to remain at the top of the sport, but people deal with success in different ways. Will Korda be able to handle the pressure that comes with leading the charge in the sport? If her performances under pressure last year are any indication, then she shouldn’t have any issues.

Everyone loves a good redemption story (this scribe included), and the story of Lydia Ko fits the bill. She was the next big thing in women’s golf after rising to world No. 1 at the age of 17, but her career somewhat stalled after that as she won just once over a five-year stretch. But ever since linking up with GOLF Top 100 Teacher Sean Foley in 2020, her game has been rebounding back into form.

Ko made history with her final-round charge at the ANA Inspiration last spring, and she finally got back to the winner’s circle not long after that. The 24-year-old continued that momentum throughout the year as she owned the tour’s low scoring average and climbed to No. 3 in the world. All that’s left to get back to the summit is another major title. If her performance over the last two years is a foreshadowing of what is to come, 2022 could be a big year for Ko.

6. Can Leona Maguire build off her Solheim Cup stardom?

The Irishwoman was not among the headliners of Europe’s underdog squad that they took to Toledo last fall, but after three days of ripping out American’s hearts, she was the story of the week. Her 4-0-1 record in her debut was remarkable — and historic — and gave fans a glimpse of the potential she possesses.

Maguire has yet to win on the LPGA circuit, but success at lower levels (plus her outstanding Solheim Cup performance) suggest big things await for the 27-year-old.

It’s time to familiarize yourself with the name Leona Maguire. You’ll thank me later.

7. Which events should you watch?

*cough* All of them *cough*

Here are a few events to keep an eye on this season.

Dates: March 31 – April 3
Location: Mission Hills Country Club, Rancho Mirage, Calif.
Why you should watch: It’s the first major of the year! It’s got a beautiful backdrop! The winner gets to jump into a freakin’ pond! Plus, it’s the last time this tournament will be held on the Dinah Shore Tournament Course. Bid it farewell with the eyeballs it deserves.

Dates: May 25-29
Location: Shadow Creek Golf Course, North Las Vegas, Nev.
Why you should watch: Match-play events are always a nice change of pace from the monotony of 72-hole stroke play events, and Shadow Creek’s exclusivity makes for must-see TV.

Dates: Aug. 4-7
Location: Muirfield, East Lothian, Scotland
Why you should watch: Links golf is the best golf, and Muirfield is among the greatest venues in championship golf.

8. Can anyone stop Jin Young Ko?

Nelly Korda’s 2021 was impressive, but even five wins couldn’t earn her Player of the Year honors over Jin Young Ko. The No. 2 player in the world won five times in the back half of 2021, and her win at the CME Group Tour Championship was just enough to nudge her past Korda and win top marks for the second time in three seasons. Ko has given us no reason to believe she won’t continue her awe-inspiring streak of consistency, and while 2022 might not be a five-win campaign, betting against her seems like a fool’s errand.

9. Who’s poised for a breakout?

Leona Maguire has already been mentioned as a prime breakout candidate, but among this year’s rookie class, Gina Kim’s name jumps off the page. The former Duke Blue Devil is leaving school early this spring to get a head start on her LPGA career, and her amateur resume suggests she has the skills for a big rookie season. The 21-year-old was national player of the year in 2019 and helped Duke win the national championship that same year, and she won 2021 ACC Championship as an individual. If she can get some confidence under her belt early in the year, Kim could be in line for a solid rookie campaign.

10. Which moment(s) will define the season?

Last season was full of moments that sent goosebumps all over my body, and I expect this year to be no different. Will we have a cinderella run at a major? Or could a Monday qualifier capture a career-altering win? It’s uncertain what this season will hold, but I’m excited to find out.