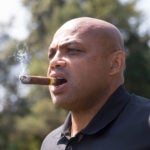 Charles Barkley will be part of the broadcast team for Sunday's The Match: Champions for Charity.

“People say, ‘Why are your shows so good?’ ” Charles Barkley, one of the in-studio analysts, said recently on GOLF.com’s Subpar podcast. “I say, ‘We have found the perfect mix of, ‘If you want to talk serious basketball, we can be serious, but if you want to laugh and have s—s and giggles, we can do that also.’

“And that’s the hardest thing on television because I don’t think people understand – we’re on from 8 till 2 in the morning. Nobody wants to talk seriously about basketball for six hours. Not me, who loves basketball. And to get you guys to watch we have to find the perfect mix of – first of all, we hope the game is good – but we can’t just sit there and X and O you to death.”

Don’t expect that this weekend, either.

Sunday’s The Match: Champions for Charity on TNT features the team of Tiger Woods and Peyton Manning taking on the team of Phil Mickelson and Tom Brady in a match play event at Medalist Golf Club. Like the basketball broadcast, there will be the serious, with analysis from former Masters champ Trevor Immelman and world No. 4 Justin Thomas. And just like the basketball broadcast, there will be the laughs, with analysis from Barkley. It will be four straight hours of golf. It won’t be four hours of golf golf.

The laughs have come from Barkley’s golf swing over the years – especially after the former NBA star was a bit critical of the play of Woods and Mickelson in 2018 during their first match. At some point during the broadcast on Sunday, he’ll have a chance to laugh last, as he’s committed to trying to make bogey or better on one hole, with $200,000 for charity at stake.

The mix of serious and no-so serious was also part of his answer on Subpar when asked whom his favorite broadcasters are.

“I love McCord and Kostis,” Barkley said. “Obviously I’m a little biased because I live here in the desert, but I thought they were great. …  And I thought they were a perfect, all-in-water combination, because Gary is hilarious and Peter is a great teacher.”

Barkley was just serious about another commentator: Skip Bayless, currently at Fox.