Why Tiger Woods, Rickie Fowler and their Tour pro pals feel so at home at Medalist 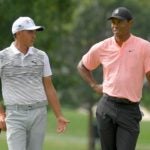 The guided tour of Florida’s premiere golf course real estate continues on Sunday when the latest Tiger & Phil thingy will afford golf fans a rare peek at Medalist Golf Club, the exclusive haunt that has counted Presidents and Hall of Famers on its membership rolls, notably a fella named Woods. But while the subtle charms of Seminole did not quite translate to a minimalist telecast, big, brawny Medalist has a lot more wow factor.

The Pete Dye design is just west of Jupiter Island, in the enclave of Hobe Sound, and the course snakes through lovely freshwater marshes. It is a relatively flat sight, and Dye (with input from Greg Norman, the driving force in the founding of the club) channeled Robert Trent Jones’s famous maxim: minimum land, maximum architecture. The endless bunkering, numerous water hazards and curvy greens will look great in the overhead shots provided by the Goodyear blimp. The risk-reward built into many of the holes should provide lively fodder for this made-for-TV extravaganza. Around Medalist, there is the feeling that after a quarter century of evolution the club has never been more ready for its closeup.

“The membership is excited for the country to see what a great course we have, what a special piece of property it is,” says club president Kevin Quigley. “It’s in perfect condition. It looks Augusta-like, with not a single blade of grass out of place. In fact, when the Tour came out a week ago to look at the course, they told us we might need to slow down the greens a little bit.”

Founded in 1995, Medalist has already gone through three distinct epochs. The original design was Dye on steroids, with fairways that ran faster than most greens, making it all the harder to avoid the many booby-traps. “It had to be one of the hardest courses in the world,” Quigley says.

Over time, Norman remade the course in his image, rebuilding greens and moving bunkers. He used his design company to do the work and billed the club, which has only 140 equity members, President George H.W. Bush among them in those days. Seven years ago, Medalist’s board of directors brought in Bobby Weed to return the course to its roots, and Norman took it as a stinging rebuke; as an act of protest he famously removed a mounted great white shark from behind the bar in the grill room.

Weed, a one-time Dye acolyte, brought back the revetted, stacked-sod bunker faces and restored the green contours. He also added six new “Tiger Tees” that stretch the course to 7,515 yards. Olin Browne, the 2011 U.S. Senior Open champ, has been a Medalist member since the late ’90s. “Some people prefer the original course, some like the second version, some think this current presentation is the best,” Browne says. “Funny thing is, they’re all right. It’s always been a great test. If you can shoot a number here, going back out on Tour feels easy.”

No wonder, then, that Woods has made Medalist his home course for the last decade. Tiger’s endorsement opened the floodgates. Today, other members of note include Brooks Koepka, Dustin Johnson, Justin Thomas, Rickie Fowler, Matt Wolff, Alex Noren and Matt Wallace, to say nothing of Michael Jordan. There is no pool at Medalist, no tennis court, no gym, no real amenities. Dinner is not served; if you want to make the scene on a muggy evening, head to the Bear’s Club or Floridian, which are always full of sparkly people.

“It’s pure golf,” Browne says of Medalist. The practice facilities are excellent, and Woods puts in work there, though he is a more welcoming presence than might be imagined. “Maybe a year ago,” Quigley says, “I saw Tiger in the short-game area, giving a chipping lesson to one of the other members and his wife.”

There are no tee times at Medalist but 10 a.m. tends to be rush hour. The golfers will zip around in three hours or so, usually in carts, have a bite of lunch and then settle in for the legendary gin rummy games. Now, a different kind of action is coming to the club, as Woods takes on his chirpy adversary Phil Mickelson with Tom Brady and Peyton Manning adding to the star power.

Whom does Browne think will win the Match II? “Tiger Woods with a homefield advantage is pretty tough to bet against,” he says. And this isn’t just any home field. “This is big-boy golf,” Quigley says. “I think the course is going to provide one heckuva good show.”