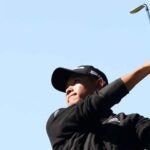 Collin Morikawa's career-first at the Zozo Championship was hilariously relatable.

Collin Morikawa is admittedly no one’s picture of relatability. After all, how could he be?

As a two-time major champion, five-time PGA Tour winner and owner of the second-longest made-cut streak to start a career in tour history (behind only a fellow named Tiger Woods), Morikawa has accomplished plenty in his career to date. Oh, and did we forget to mention? He’s still four months removed from his 25th birthday.

And that’s to say nothing of Morikawa’s golf game, which might be the least-relatable part of his existence. Perhaps the best word to describe his swing is “flawless,” and his iron-play has been called that of a “real-life Iron Byron” (the Byron Nelson-inspired name of the swinging robot used to test clubs).

Yes, if there’s any criticism you could invent for Morikawa, it’s that he is not very relatable. But that didn’t stop him from having an extremely relatable moment on Saturday at last week’s Zozo Championship.

It all started on the 6th hole at Narashino Country Club, the host of this year’s Zozo, a 587-yard part-5 that played as the second-easiest hole on the course for the week. To that point in the week, Morikawa had played the 6th at two-under with a pair of birdies. After another solid drive, he stood in the fairway with one of his best clubs in his hand: the pitching wedge.

Now, it’s important to recognize that Morikawa typically hits his six-iron as close to his target as other players hit their pitching wedges — so when he’s holding an actual pitching wedge, you expect his ball to get pretty close to the hole.

So, it was only natural to assume that the 24-year-old would once again clean up, sending yet another towering ballflight into the air and onto the green in close proximity to the flagstick. But then, something utterly unexpected happened.

“Yeah, shanked a pitching wedge straight in the trees,” Morikawa said with a laugh after the round. “So really good way to start the day after being 1 under through five.”

As the two-time major champ explained, much of Saturday afternooon turned into a struggle. But the moment on No. 6 accentuated the experience: a reaction he said was the very first of his career.

“Well, I did something in my career that I haven’t done yet, was shank a shot,” he said. “I don’t think many people know this. I was in the middle of the fairway on 6, the par 5.”

There’s a first-time for everything in Morikawa’s young career – including, it turns out, a cold shank from the middle of the fairway. But hey, there’s a bright side here, too: he’s never been more relatable.