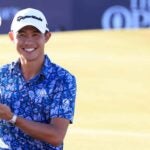 Collin Morikawa made a lot of history at Royal St. George's.

At only 24 years of age, Collin Morikawa is a two-time major champion, as his final-round 66 bested the Open Championship field by two shots. And while two major championship titles are more than many players achieve over the course of an entire career, Morikawa’s win at Royal St. George’s also propelled him into the rarefied air of a slew of other historic achievements.

Morikawa’s stellar play has long drawn comparisons to another notable Californian: Tiger Woods. And for good reason: With Morikawa’s Open win, he became only the second player ever to win both the Open and the PGA Championships before the age of 25. Woods is the only other player in history to have achieved that feat.

Morikawa is the only player in 25 years to go bogey-free in his final rounds to win multiple majors. He’s also the first player since Bobby Jones to win two majors within eight starts. He’s the youngest player to win the Open when trailing in the final round since Seve Ballesteros won at age 22 in 1979 at Royal Lytham & St. Annes.

Morikawa is also only the third player ever (after Jack Nicklaus and Bobby Jones )to win an Open when behind through 54 holes before reaching age 25. He’s the 10th player to win an Open in his debut and the first to do it since 2003, when Ben Curtis, coincidentally, also won at Royal St. George’s. Morikawa also joined the company of Jordan Spieth, Tiger Woods and Bobby Jones as only the fourth American to win the Open before age 25.

Ray also revealed an excellent nugget about the historic heights Morikawa could reach, given his current credentials.

Eleven majors, a career grand slam? That’s heady stuff to consider. Regardless of what Morikawa does with the rest of his career, one thing’s for sure: he’s already a lock for the Hall of Fame. We’ll look forward to what’s still to come from the young American.