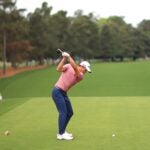 Collin Morikawa tees off during the third round of the 2021 Masters.

It takes some golfers years to figure out certain golf courses, or how to play a certain style of golf course.

But don’t blame Collin Morikawa for ignoring that whole stereotype. Despite having little experience playing links golf, Morikawa won the 2021 Open Championship at Royal St. George’s in his very first Open start. He called it a learning process, but he’s apparently a quick study.

The two-time major champ was this week’s guest on GOLF’s Subpar Podcast with co-hosts Drew Stoltz and Colt Knost, and Morikawa was asked if that Royal St. George’s win was the most impressive of his career since it came in his Open debut.

That answer, however, only came after an interesting Augusta National analogy.

“This is what I learned at Augusta — everyone tries to play what they think needs to win this tournament, right? Everyone thinks they have to go play it low and run everything up or do this [at an Open Championship]. Or at Augusta, you have to play draws at every single hole,” said Morikawa, whose stock shot is a baby fade. “And that’s what I’ve done so wrong the first couple times I played the Masters. I tried to hit this straight ball everywhere and that’s all I worried about leading up in the prep work. How do I hit this straight drive? How do I hit a rope-hook 3-wood, and I’ll be fine and go win the Masters.

“It’s so wrong in a sense of, when I showed up to The Open, like everyone’s trying to do this, do that, I said screw it, let me just go play my game and if I need to adjust things here that’s what I’ll do and that’s what I did. I think certain places are going to make you do certain things and that’s completely fine, but that doesn’t mean I need to change my entire game plan of what I do best, and that’s literally approach shots. So let me just stick to my strengths.”

In his two Masters starts, Morikawa tied for 44th in 2020 and tied for 18th in 2021. Oh, and he eventually did answer the original question: Was The Open his most impressive victory?

“So I guess it is one of the most impressive ones, cause I really showed up and stuck to what I believed in and what I thought was my actual game,” he said. “And that’s what Augusta has kind of tricked me into that, like, you gotta go play this high draw and that’s the only way to win this tournament.”

We’ll see if Morikawa’s evolving Masters strategy pays off one month from now.

You can listen to the complete interview with Morikawa below.