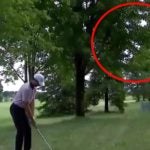 Cameron Tringale's ridiculous angle through the trees set him up for a miraculous par save.

Trees: you can go over them, under them, through them, or — far more commonly — ricochet off them. Few moments in golf test “Murphy’s Law” more than players attempting to avoid striking wood when playing around trees. How can something that’s supposedly “95 percent air” feel so much like it’s 95 percent wood?

Perhaps because trees are not, in fact, 95 percent air. But a more complex conversation around forestry and tree composition will have to wait for another day, because Cameron Tringale just hit a shot that brings the “95 percent air” theory right back into contention.

It all happened on the long, par-4 3rd hole at TPC Twin Cities during Sunday’s 3M Open final round. Tringale — looking to give himself a reasonable approach into the pin — blocked his tee ball directly into the trees on the right.

When he reached his ball, he found what appeared to be an impossible line to the hole. With a wall of trees directly ahead and out of bounds stakes lining the right side, the only play, it seemed, was to hit a low pitch back into the fairway to his left. From there, he’d have roughly 160 yards left to get up-and-down for par.

Not terrible, right? Evidently, it was not good enough. Instead, Tringale elected to attempt the approach of the week. His line? A high, arcing cut over the stakes on the right side and through the wall of trees, aiming to reach the backside of the green some 200 yards away. The largest gap between branches in front of him was roughly the length of a forearm.

For anyone watching, it seemed like a truly awful idea right up until the moment it worked. Tringale somehow managed to poke his approach over the stakes and through the trees, finding a perfect roll that came to rest a hair past the green. Check it out for yourself.

While he couldn’t finish the birdie, Tringale went on to tap-in for par. An adventurous par if there ever was one, or as Tringale would tell you, just as he drew it up.