2020 3M Open live coverage: How to watch the final round Sunday 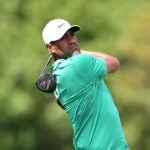 Tony Finau is in contention heading into Sunday at the 3M Open, here's how to watch as he chases his second PGA Tour victory.

Three rounds are in the books, and now a jam-packed leaderboard heads to the course for the final round of action at the 3M Open. Here’s everything you need to know to watch the final round from TPC Twin Cities in Blaine, Minn.

Michael Thompson and Richy Werenski are tied for the lead heading into the final round of play at the 3M after a pair of 68s on Saturday. But while neither player ranks in the top 200 in the world, a trio of big names sits lurking within striking distance heading into Sunday.

Former Masters champion Charl Schwartzel is tied for 3rd at 13 under. The South African is searching for his first professional win since 2016, while the recently Twitterless Max Homa is alone in 5th at 12 under.

One of the week’s most interesting storylines, Tony Finau, sits tied with Schwartzel at 13 under. On Monday, Finau announced that he parted ways with longtime caddie Greg Bodine, whose time on Finau’s bag saw him rise from no-name to PGA Tour stud, but stopped short of reaching consistent Tour success.

“Yeah, I think my caddie and I had a great run,” Finau said. “We were together for six years and it’s a tough thing, you know. On a personal level I love the guy and on a business level I felt it was time for a change in my situation and something just different.”

In Bodine’s place for the week is Finau’s coach, Boyd Summerhays — a switch that’s paid early dividends. The Utah native has tallied a trio of rounds in the 60s and heads into Sunday with an opportunity ripe for the taking, only two strokes back of the lead.

How to watch the 3M Open final round on TV

Coverage of the final round of the 3M Open begins Sunday at 1:00 p.m. ET on Golf Channel. They will air the first two hours of coverage before the action switches over to CBS at 3:00 p.m. ET for the remainder of the tournament.

How to stream the final round of the 3M Open

Those with a cable subscription can watch the entirety of the tournament coverage online. The first two hours will be streamed through NBC Sports Gold, and the final two hours can be found on CBSSports.com (though a login is required). Fans can also view featured group coverage all day on PGA Tour Live, but an account is needed to access the stream.