How Google Earth made this pro aim directly at the trees 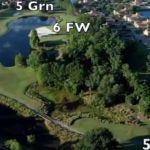 The 5th and 6th holes at the King & Bear Golf Course.

Dawson Armstrong had missed the cut two weeks ago at the Korn Ferry Challenge. He was done after only two rounds, after not playing for three-plus months due to golf’s coronavirus hiatus. He was mad. He went online.

He found a loophole. A cheat code.

The 5th hole at the King & Bear Golf Course, site of last week’s King & Bear Classic, dog-legs nearly 90 degrees right about a third of the way into its 546 yards, with trees, sand and water guarding against a corner cut. It’s potentially a long second shot into the par-5.

Armstrong stuck his tee in the ground, shuffled his feet 45 degrees right and aimed at a batch of trees.

Just over those trees is the 6th green and the 6th fairway. Or a short iron into the 5th. It’s risky. It’s rewarding. He eagled it during the second round and birdied it during the first, third and fourth rounds.

“I saw it when I missed the cut last week – yeah, fun times last week,” Armstrong said. “I was just doing a little mapping out of the course just to see what shots you want to hit. I realized the fairways are pretty big here, and I look on Google Earth – it’s obviously a satellite views of the holes – and I see that it’s 280, 275 to the back of the green on 6, and it’s 70 yards wide from hazard to out of bounds and the fairway up there is 40 yards wide and you have 130 yards in. I thought, well, shoot, if the trees aren’t too tall, then might as well give it a try in the practice rounds.”

He gave it a try. Couple other players did too. The trees weren’t too tall.

“Everytime we played it, we had about eight golf balls on that hole – myself and a few other guys tried it as well. We haven’t had a single ball in the hazard, out of bounds,” Armstrong said.

“Well, I think it’s a good play if you want to take a risk. I don’t know, that was kind of a fun jump-start to the round.”

Armstrong finished the tournament tied for 37th. He had entered the final round tied for third.

“What’s really funny is, if anyone was out there watching on hole No. 5, it’s such a – in hindsight, it’s a smart play, because there is so much room up there on No. 6. But if you’re just looking at it blind off the tee on No. 5, it’s such a dumb play,” Armstrong said. “We just take it over the trees on 5 and go about 45 degrees to the right of the fairway, and take it over there and about have a wedge in.”

What's one enduring lesson of the Covid era? Some pros are just made for crisis mode