‘The greatest moment of my golfing career’: Cameron Champ wins one for Pops 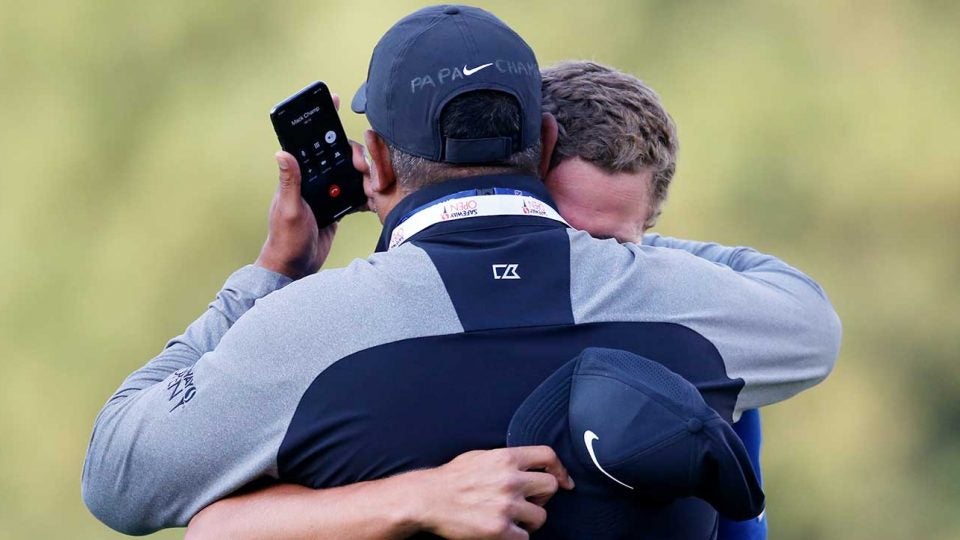 Cameron Champ hugs his dad while his grandfather is on the phone after Champ's Safeway Open title.
Getty Images

Jeff Champ’s phone illuminated as his son, Cameron, hugged him as tightly as he could. The screen on the phone in Jeff’s left hand read “Mack Champ.” That’s Jeff’s dad, Cameron’s grandfather. They both call Mack their hero, and they both wish he would have been there on Sunday, watching Cameron win the Safeway Open for his second career PGA Tour victory, but they both knew that wasn’t possible. Cameron kept clinging to his dad; two men overcome with emotion, the man on the phone dying of cancer.

Cameron Champ didn’t even plan on playing in the Safeway Open. Mack Champ was diagnosed with stage 4 stomach cancer on July 9, and he recently decided to go on hospice care in his son Jeff’s house in Sacramento. Cameron decided to play, but he didn’t stay on site in Napa, Calif., he instead spent every day commuting about an hour to Sacramento to stay with his family, to see his grandpa — a.k.a. “Pops.”

Mack was born in 1941 and caddied in the late 1940s, but he didn’t start playing the game until the ’60s when he was overseas in the Air Force. He got Cameron started in golf when he was 2, and the young phenom used to hit golf balls over his grandparents’ house. Years later, in his 70s, Mack caddied for Cameron at The First Tee Open at Pebble Beach, hauling his bag for 18 holes for five straight days. Cameron had to help his grandpa climb the treacherous uphill 6th hole at Pebble, but Mack wanted to be there.

Tournaments
Tour Confidential: Are the elite tours failing to test the best players in the world?

“He’s been a huge influence, everything he’s gone through as a person,” Cameron said. “To be so loving and passionate about others than himself and still loving the game of golf and then teaching his grandson, giving me the chance as a kid to love the game and grow the game with my family, and to be able to be sitting here with y’all.”

Cameron won the Sanderson Farms last fall but struggled with injuries and living up to lofty expectations in the second half of the season. He tied for 28th in his title defense at the Sanderson last weekend and arrived at the Safeway with 80-to-1 odds to win. Due to the time he spent with his family and grandpa, he didn’t see the course until he teed off at 7:40 a.m. local on Thursday. He shot 67. Then on Friday he shot 68, and then another 67. Playing with tributes to his grandpa written out on his shoes, glove and stamped on his wedges, Cameron Champ led by three after 54 holes.

“It’s been a pretty emotional week,” he said, speaking to the media on Saturday night. “[Mack] just made me realize there’s a lot more to life than, like I said, golf. Whether I shoot 80 tomorrow or whether I shoot 65, I really don’t care. I’m just going to focus on, you know, putting my best round together.”

Even if I never win another tournament again or I win however many, this will definitely be the greatest moment of my golfing career.

Cameron Champ was three under on the front on Sunday and never trailed on the back nine, although an Adam Hadwin surge forced Champ to get up-and-down for birdie on the 72nd hole to win. He made the putt from just inside four feet to shoot 69, threw his arms into the arm and wiped away a tear. He hugged his caddie, Kurt Kowaluk, before a long embrace with his father, who had Mack on the phone. The same thing happened when Cameron won the Sanderson Farms, but this time it was different. The hugs lasted longer, and they meant more.

“I’ll say this now,” Cameron said, “I really feel like this will be, no matter what, even if I never win another tournament again or I win however many, this will definitely be the greatest moment of my golfing career.”

Jeff Champ was interviewed by Golf Channel moments after Cameron won. As Cameron made the rounds embracing the dozens of supporters who made the trip — his mom, brother, sister, in-laws, nieces, nephews, his friends, his girlfriend and his agent — Jeff spoke about the circumstances the family has faced the past several months, and how his dad wanted to go into hospice just like Jeff’s mom did. Jeff sounded tired and exhausted, yet happy and relieved. “I don’t know what to say right now,” he said, “but God is good.”

What an emotional moment for Cameron Champ and his family. pic.twitter.com/gc3hQ4rrCs