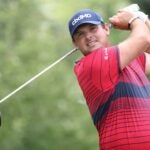 Patrick Reed will make his second appearance in the Olympic Games next week.

BLAINE, Minn. — As Patrick Reed made his way from the 18th green to the clubhouse at TPC Twin Cities on Sunday, Reed walked around the grandstands and crossed under a suite. A few fans were out to greet him, and one yelled down, “Let’s go, Patrick! USA!”

That’s right, in what is sure to be a whirlwind few days, Reed’s next stop is Tokyo and the Olympic Games. News broke on Saturday night that Bryson DeChambeau had tested positive for Covid-19 in one of his final tests before heading to Japan, so he was out, and Reed was in.

Reed said a rules official told him after his Saturday round at the 3M Open he needed to speak with Andy Levinson, a senior VP with the PGA Tour, about the Olympics. Reed already knew he was the first alternate, so he know what was happening.

“Of course you would love to have that call, but at the same time you don’t wish that against any of the guys,” Reed said on Sunday, after signing for a even-par 71. “Those guys were all excited to go play. I feel bad for Bryson, I know he was really looking forward to going, representing the country and going over there and playing in Tokyo. It’s an unfortunate situation. The good thing is the team and everything, we’re able to get it to where I was able to go and fill the spot and be able to get over there in time and be able to play.”

But it’s going to be a quick turnaround now. According to guidelines, Reed has to test negative for Covid-19 three straight times at least 24 hours apart before leaving for Japan. Reed said he was tested at about 5 p.m. Saturday and is leaving for Houston on Sunday evening. He’ll get tested shortly after he lands, then test again on Monday evening. If he’s negative, he’ll go to San Francisco, then direct to Tokyo and arrive on Wednesday afternoon. The tournament starts on Thursday.

Reed doesn’t think he’ll have time to squeeze in a practice round but says his coach, Kevin Kirk (who will caddie for him), and the rest of his team keep reminding him how successful he was at Monday qualifying years ago. Reed famously got through a handful of Monday gauntlets early in his career and earned his PGA Tour card.

“‘Hey, when you were chasing Mondays, you were 6 for 6 when you were playing the golf courses blind and you’re 0 for 2 on playing practice rounds,'” Reed said, relaying what his team had told him. “These days with how good yardage books are and with how much we have to kind of figure things out on the fly as it is, I expect to go in there and play well and be able to manage the golf course and hit the golf shots.”

Reed is the only two-time Olympian for the men’s competition; he was T11 at the Rio Games in 2016. He’ll now join Justin Thomas, Collin Morikawa and Xander Schauffele in repressing the USA.

Dustin Johnson had already declined his invite to the Games, and Patrick Cantlay and Brooks Koepka were the alternates next up when the teams were set. But with Reed accepting, that means those two would have had to decline.

Reed was asked on Sunday why the hassle would be worth it.

“Anytime I can represent my country and go play for my country, I’m going to do it no matter what, no matter where it is, no matter what time zone or how I have to get there or anything,” he said. “When they gave me the name Captain America, the fans did, it feels like an obligation and a duty of mine to go out and play for our country whenever I can and whenever I get the call.”

DeChambeau was not the only last-minute scratch from the Olympics. U.S. Open champ Jon Rahm also tested positive for Covid-19 in one of his final tests before departure and had to withdraw. The Spanish Olympic Committee said it would not have time to find a substitute for Rahm, so he’ll be replaced by a golfer from the IGF Reallocation Reserve List.