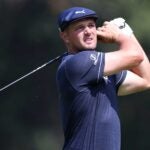 Bryson DeChambeau shot the lowest round of his PGA Tour career on Friday.

The field went low at Caves Valley on Thursday. Bryson DeChambeau took it to another level on Friday.

DeChambeau blitzed the first-time PGA Tour venue in the second round of the BMW Championship, firing a 12-under 60 for the lowest round of his PGA Tour career, breaking the course record by three.

DeChambeau needed to birdie one of the last two holes on Friday to get to 59, which would have been the 13th sub-60 round in PGA Tour history, but he settled for tap-in pars. Jim Furyk still holds the record at 58, and 11 other scores of 59 have been recorded. DeChambeau’s round was the 43rd 60 in PGA Tour history and third this season.

“I knew all day if I continued to hit fairways and greens I could give myself a really good chance to shoot a nine- or 10-under round today,” DeChambeau told Golf Channel’s Steve Sands after the round. “I didn’t know I could get it to 12, possibly 13 under, but that was certainly the goal.”

DeChambeau opened with a four-under 68 on Thursday and was four off the lead, but he vaulted up the leaderboard on Friday. Playing preferred lies due to wet conditions, DeChambeau made two eagles and eight birdies without making a bogey to get in at 16 under overall through 36 holes, one ahead of Patrick Cantlay.

Playing alongside Jordan Spieth and Harris English, DeChambeau birdied the first two holes by draining birdie putts of 11 and 3 feet. He made an 11-footer for eagle on the par-5 4th and closed the opening nine with birdie putts of 12 feet, 5 feet and 31 feet, respectively, on holes 5, 7 and 8.

He turned in 29 and kept it going, making birdies on 11, 12 and 14 before reaching the par-5 16th. On 16, DeChambeau was in the right rough off the tee and had 247 yards to the hole, but he pounded an iron that landed in the middle of the green, rolled back and touched the fringe before riding the slope and funneling to just three feet away. He made the eagle putt to get to 12 under and needed a birdie on 17 or 18 to go sub-60.

On the par-3 17th, DeChambeau missed his 15-footer for birdie a couple of balls out to the left, and on the par-4 18th he spun his approach from 143 yards to just 6 feet away. His playing partners cleared the stage for him, but DeChambeau missed the putt out to the left and tapped in for par. He signed for 60, two strokes clear of his PGA Tour low of 62, which he had shot twice.

“I had the right speed; I misread the putt,” DeChambeau said. “It’s one of those things — it was an awesome opportunity. I had a couple of birdie opportunities on 17 and 18, and it didn’t happen, but still really proud of the way I handled myself and it was great to feel some pressure, which was awesome.”

The BMW Championship, the second leg of the FedEx Cup Playoffs, continues this weekend at Caves Valley in Owing Mills, Md. The top 30 in the FedEx Cup standings after this week head to the season-ending Tour Championship at East Lake.