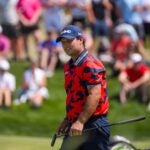 A major championship in the rearview and an Olympic competition coming right up? Golf's calendar keeps rolling.

I’ll assume that you, like me, were up late Sunday night trying to decipher surfing scoring in the Olympics. So let’s make this an extra-snappy edition of the Monday Finish to get you caught up on all manner of golf goodness.

Minjee Lee won the Evian Championship, the first major championship title of the 25-year-old Aussie’s career. She began the day seven shots off the lead but rallied big-time, making birdie at four of her last five holes to find a spot in the playoff, where she made birdie again (and nearly eagle!). Well done and well won.

Lee said she began the day with the goal of making as many birdies as she could. Mission accomplished.

“I’m speechless,” she said. “I’ve been waiting for this for so long.”

Cameron Champ won the 3M Open at TPC Twin Cities, marking the third PGA Tour victory of his young career. The 26-year-old made one double bogey and zero bogeys on the weekend against 11 birdies, good for a two-shot victory that he attributed to a fresh outlook and positive mindset. Of course, a positive mindset helps play better, but playing better helps with a positive mindset, too. Champ was feeling understandably cheery post-round.

I got the chance to ask Champ post-round why he’s done so well converting contention into wins. In other words: Why’s he so good at winning?

An under-the-radar 55-year-old, Stephen Dodd, won the Senior Open Championship at Sunningdale despite just one tournament start in the previous 18 months.

Nacho Elvira won on the European Tour, losing a six-shot lead on Sunday before winning in a playoff when opponent Justin Harding three-putted the 18th hole for bogey. He dedicated the win to Celia Barquin Arozamena, the star Iowa State golfer who was tragically murdered in 2018.

“To be honest I was thinking especially during the last nine or 10 holes about Celia Barquin, she passed away a few years ago,” he said after the round. “I was good friends with her family and this is for her.”

Dylan Wu won on the Korn Ferry Tour, punching his ticket to the PGA Tour next season.

And Lilia Vu won the Symetra Tour’s Twin Bridges Championship in Albany, N.Y to take the lead on the tour’s money list.

Jeongeun Lee6 had an incredibly eventful week. On Friday she shot 61 to tie a major championship scoring record. On Saturday she maintained a five-stroke lead. On the front nine Sunday she started with a birdie but then handed away that lead with bogeys at 3, 4, 5, 8 and 9. Her hopes seemed all but dashed — until she birdied 16, 17 and 18 to get into a playoff. Game on.

But when Minjee Lee stuffed her second shot on the first playoff hole, Lee6 couldn’t keep pace. She caught her approach thin and found the front pond, effectively ending her tournament chances.

“That second shot was terrible,” she said after the playoff. “But second is really good.” If you’re going to be in the Almost-Winner’s Circle, that’s the mindset to have.

Yealimi Noh, who turns 20 this very Monday, put on a ball-striking display down the stretch and made a disappointing par at the short par-5 18th to finish just one shot outside the playoff.

“It just sucks because I didn’t birdie a single par-5 and I had a lot of six-footers coming down — it’s just like, you always think about what you missed, but overall it was really positive,” she said.

At the 3M, the group at T2 included professional runner-up Louis Oosthuizen. There’s an instinct to treat second-place finishes as failures for famous non-winners like Oosthuizen or Tony Finau, but in this case that would be the wrong way to look at it. Oosthuizen’s final-round 66 was the second-low of the day and included three birdies in his final four holes. Runner-up was an achievement.

“I was happy to play this week. I sort of didn’t really want to just think about last week, about not playing great on that Sunday and immediately quickly go back into tournament mode and then play this tournament,” he said. “We had a good time here this week and I’m just trying to see if I can go one better than all these seconds and thirds.”

Through one weekend of Olympic action, here are seven impressions:

6. I was trying to think of the golf equivalent of the below triathlon boat malfunction. The closest I could get was a hovering drone looking for a cinematic shot of the first tee and instead getting pummeled by driver, sending a ball out of bounds. Actually, that sounds like an interesting wrinkle…

7. I love the Olympics. You don’t have to love them but I sure do. Badminton? In. Team handball? Double in. Kayak slalom? Clear my whole entire schedule.

Wait, who’s out in Tokyo?

As for the golf news from Tokyo, well, it’s mostly been bad thus far. First, Bryson DeChambeau was ruled out due to a positive Covid test. That’s obviously bad news because we don’t want DeChambeau suffering any ill effects from the virus itself. But it’s also a bummer that we won’t get to see a brand-new course through the lens of DeChambeau’s game.

There was also a missed opportunity when Brooks Koepka passed on the alternate spot for the U.S. Olympic Team. Serious issues of life or golf aside, Koepka replacing DeChambeau on the Olympic team would have been terrific.

The silver lining is that Patrick Reed is back representing Team USA. Reed seems to take complete joy in donning the stars and stripes but also views his participation as a national service, which is an intense combination. Also, whenever Reed steps into the spotlight something interesting nearly always follows, making him a must-watch corner of golf’s Olympic contingent.

When it comes to Jon Rahm’s Olympic ordeal, it’s much more difficult to find a silver lining. Rahm was booted from the Memorial last month after a positive test on Saturday, but has since been vaccinated. I’m no epidemiologist, just a golf writer — but if Rahm is unable to compete because of some lingering dead virus triggering a positive test, that’s a bummer.

Credit to Rahm, though, for handling the situation with appropriate perspective and grace:

After a stretch of unusually scorching summer temperatures, Seattle has settled into 75 and sunny, weather that begs for afternoon golf whenever possible. The city courses are packed. The golfers are happy. The rest of the summer should bring more of the same.

Oh, and the cruise ships are back…

It makes me feel tangibly better to spend time with Ted Lasso again. My only gripe is that centering an entire plot around killing a mascot dog with a penalty kick felt kind of dumb, when the show had so deftly balanced being smart and ridiculous up to that point.

(You might add that it’s dumb to slip a Ted Lasso review into a golf column, but it’s only two sentences — three now, I guess — so I hope you’ll let it slide.)

How is Reed getting to Tokyo? Who is he splitting a flight with? Is he wearing a star-spangled cape? Playing cards on the plane? How much time does he have to spare when he touches down?

2. Rory McIlroy, on and off-course.

McIlroy is always must-watch with a club in his hand or a microphone, but that will be doubly true at this week’s Olympics. On the course, he arrives in uncertain form but at a potentially friendly venue. Off the course he’ll be navigating the awkwardness of being a not-so-patriotic Northern Irishman teeing it up for the Republic of Ireland. I’m sure he’ll speak thoughtfully about the complex experience, and I hope he does.

One is Sean Zak, my Drop Zone co-host who has been in Japan for coming up on a week now and will have you covered from on the ground.

The second is Doug Ferguson, AP writer on the golf beat, who encountered a particularly thorny set of travel complications that you can peruse here.

Wishing you simpler logistics in your own life. See you next week!