Louis Oosthuizen on moving on from Open loss: ‘You don’t want to always talk about close again’ 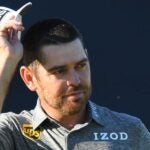 BLAINE, Minn. — Louis Oosthuizen is rarely one to pass on speaking to the media, even after some of his tough losses. But last Sunday at the Open Championship at Royal St. George’s, where he held the 54-hole lead but ultimately lost to Collin Morikawa, Oosthuizen wasn’t in the mood.

He didn’t speak following his final-round one-over 71, which was four back of Morikawa and good for a tie for 3rd. Oosthuzien’s close calls in majors have been well-documented. He’s had six runner-up finishes — two this year — and nine top 5s. His only win remains the 2010 Open Championship at St. Andrews.

On Wednesday, Oosthuzien spoke to the media at TPC Twin Cities for the first time since last week’s Open.

“It was obviously very disappointing the way I played the stretch of holes there in the middle of the round, or just not do what I should have done the front nine and really gave it a good push on the back nine,” he said. “In the end I was just too far behind and needed to force things and just couldn’t make up the shots. Yeah, it’s sort of, you don’t want to always talk about close again, finishing second, finishing third, so I wasn’t really — I wasn’t really up for that conversation right there. So it was disappointing.”

While Oosthuizen wasn’t as sharp in his final round at Royal St. George’s, he didn’t blow up, either. Morikawa’s four-under 66 was one off the lowest round of the day.

“Collin played the way you should play to win a major, especially on a Sunday,” he said. “He didn’t make many mistakes and when he did make a mistake, he made unbelievable up and downs for pars. It was just frustrating because I knew my game was definitely there to have a good solid day. Weather was as good as you can get at The Open, so it was just a bit of frustration and disappointment really.”

There will be little turnaround time now, with the 3M Open starting on Thursday. Oosthuizen jumped on a charter flight on Sunday night, arrived in Minneapolis at 2 a.m. on Monday and got some much-needed rest. He said he hasn’t done much on the range this week. He worked on his putting a bit on Tuesday and played in the pro-am on Wednesday.

Playing right away, though, he says, is a good thing.

“I think I’m glad that I entered in this event to sort of get back in there and play and not really sit around at home and thinking about the disappointing Sunday last week,” he said. “I’m happy to be out here, see the golf course and looking forward to this week.”

Oosthuizen is grouped with Dustin Johnson and Bubba Watson for the first two rounds. They’ll tee off at 8:23 a.m. ET on Thursday and 1:33 p.m. on Friday.