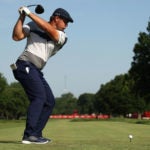 Bryson DeChambeau hits his tee shot on the 17th hole at Detroit Golf Club on Friday.

Golf, the International Golf Federation writes, might have begun in 100 B.C. The Romans played paganic, in which players hit a stuffed leather ball with a bent stick.

Golfers have been searching for perfection for 2,100 years.

Golfers will continue to search, Bryson DeChambeau said this week.

DeChambeau has perhaps tried as hard as any golfer over those millenia. He’s embraced the math and science behind the game. Even with his own body. Over the past year, he’s put on upward of 40 pounds, including 15 pounds over the PGA Tour’s recent three-month hiatus due to the coronavirus, in the search of adding more distance.

DeChambeau has gone low. Entering Saturday’s third round of the Rocket Mortgage Classic, where he entered one shot out of the lead, he hasn’t shot above par in the 14 rounds since the Tour’s return. DeChambeau just will never go low low.

“No. Well, from a human perspective, like it’s probably impossible,” DeChambeau said when asked if golf can be perfected.

“If you had a robot out here calculating all the variables, I think you could potentially get really close to perfection, but from a human perspective, there’s no way to understand all the wind. The wind is the biggest variable, and the grass length is the second biggest variable that we just don’t have control over and never will.”

It’s a concept so fictional that even a fictional movie joked about it. In one of the fight scenes in “Captain America: Civil War,” Clint Barton, or Hawkeye, is about to engage Tony Stark, or Iron Man. Hawkeye, as his moniker suggests, doesn’t miss. Anywhere.

Perfection, likely, would be a 50 on a par-72 with four par-3s, 10 par-4s and four par-5s – birdies on the par-3s, birdies on the par-4s and eagles on the par-5s. According to the Guiness Book of World Records, the lowest golf score over an 18-hole course is a 55, on a par-71, by Rhein Gibson in 2012. (Gibson is also in the field this week for the Rocket Mortgage.) The lowest score on the PGA Tour is Jim Furyk’s 58, which he shot on the par-70 at TPC River Highlands during the final round of the 2016 Travelers Championship.

The question of perfection even goes back a while. In 1959, Sports Illustrated asked 14 players. The answers were the same as DeChambeau’s.

“If you mean the perfect game within the realm of probability, maybe it will be played,” Arnold Palmer said. “That would mean hitting 18 perfect tee shots and 18 perfect second shots and landing in the cup in no more than one or two putts. But no one is ever going to birdie 18 holes.”

Of course, as 2,100 years have shown, players keep trying. There’s thrill in the chase.

“My job is just to be more consistent and if I can keep being more repeatable, have my dispersion be a little less as I’m hitting it farther, there’s a lot of strokes to be gained there,” DeChambeau said.