Bryson DeChambeau reveals the unlikely catalyst for his physical transformation 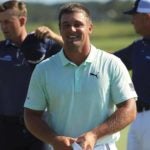 Bryson DeChambeau smiles after his opening-round 67 at the 2020 RBC Heritage.

Bryson DeChambeau is the talk of pro golf right now, and for good reason. The five-time PGA Tour winner has undergone a much-publicized physical transformation in the last year, adding at least 20 lbs. of muscle in mission to drastically increase his swing speed and driving distance.

And, so far, it has worked. Bryson led the field in driving distance at the Charles Schwab Challenge (where he finished T3), and he also leads the season-long rankings in the same category. But you might be surprised to hear exactly what inspired the five-time Tour winner to bulk up and aim for 200+ mph swing speeds.

During his press conference following a solid opening-round 67 at the RBC Heritage, DeChambeau revealed that his recent mission to gain weight and speed was a spur of the moment decision, in the face of boredom and complacency with his game.

“Yeah, well, I got bored,” DeChambeau said on Thursday. “I love the game of golf, and I love the journey that it takes me on, and I want to keep pursuing different avenues to try to get better, be the best that I can possibly be, and I felt like this is one that I could accomplish.”

Specifically, the decision to begin his quest was made after the 2019 Shriners Hospitals Open in October, where he went 20 under to finish T4.

“Right after Shriners, I just said, you know what, I’m just going to change things up,” he added.

DeChambeau hasn’t been shy to share his journey to hulk status, and he’s received a fair share of criticism from fellow Tour pros and TV analysts alike. But having failed to capture a victory since his four-win breakout season in 2018, Bryson felt the need to change something to get back into the winner’s circle.

He’s knocking on the door again this week at the Heritage, and with the results speaking for themselves, don’t expect DeChambeau to give up his mission any time soon.