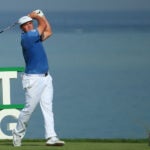 Bryson DeChambeau made seven birdies in an 11-hole stretch Thursday in Saudi Arabia.

The Saudi International kicked off overnight for most golf fans in the United States, leaving them with one diverse leaderboard when they awoke Thursday morning. Thirteen different nations were represented in the top 10 at Royal Greens Golf and Country Club, as the European Tour proudly tweeted out early Thursday. That’s about as diverse as it gets! Here are three other things that happened while you were sleeping:

DeChambeau’s tournament golf has slowed down in the last few months, as he has only played three times since winning the U.S. Open in September. The man has been in the lab, so to say. But the results have not changed for the worse. The 27-year-old made seven birdies during his first round in Saudi Arabia to card an opening 65.

What’s even more interesting is that DeChambeau was one over thru his first five holes after starting on the 10th. So that flurry of seven birdies actually took place over the course of just 11 holes as he finished with a couple pars. He’s currently slotted in the T4 position with a bunch of others, four shots back of David Horsey’s nine-under 61.

We don’t need to set an incredibly high standard for the reigning Masters champion, but it’s difficult not to. He is the No. 1 player in the world, after all, and this course definitely suits his game. Most all courses do, to be fair. But Johnson’s opening 67 was unlike most. Really, it was just incredibly clean.

Johnson made three birdies and 15 pars to keep his scorecard bogey-free Thursday. When he plays bogey-free, generally we’d expect the man to shoot something around 65 or better. He’s just that good. But DJ wasn’t so clean with the putter, taking 31 putts in the first round and losing more than a shot and a half to the field with the flatstick.

The good news for him is it seems his driver is back in shape. Johnson told GOLF.com last week that he was still working to dial in his new equipment and was disappointed with his driving performance at the Tournament of Champions in January. Well, he hit half his fairways in Saudi Arabia during the first round, but drove it long enough to finish in the top 5 in Strokes Gained: Off the Tee by the time he finished.

Sergio Garcia is making his return to the Saudi International two years after he was disqualified from the event for serious misconduct in 2019. With one round in the books, he has plenty of work to do.

Garcia actually made the turn in two-under 33 on his first nine, the back nine, but failed to make a birdie on the final nine, adding a pair of bogeys to nullify his solid start. It was an opening even-par 70 that left much to be desired. Long one of the best ball-strikers in the world, Garcia drove it well during the first round. It’s just his irons game that didn’t follow suit. From the first wave of players, Garcia was among the worst, losing about 2.5 shots to the field with his approaches during the first round.