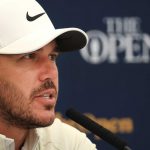 Brooks Koepka talks to the media on Tuesday at Royal St. George's.

Brooks Koepka isn’t worried about a long-standing spat with Bryson DeChambeau turning into a distraction when the Ryder Cup rolls around come September.

“You realize it’s only a week, right?” Koepka said.

Speaking to the media on Tuesday at Royal St. George’s, where he’s preparing for the 149th Open Championship, the four-time major champ fielded five questions on either his feud with DeChambeau or how it might impact the U.S. Ryder Cup team.

He’s downplayed the potential Ryder Cup drama before and did again on Tuesday.

“It’s only a week. I mean, look, I can put it aside for business. If we’re going to be on the same team, I can deal with anybody in the world for a week,” Koepka said. “I’m not playing with him. I’m pretty sure we’re not going to be paired together; put it that way. I think it’s kind of obvious. It doesn’t matter. We’re not going to be high-fiving and having late-night conversations.

“I do my thing, he does his thing. Yeah, we’re on the same team, but it’s not an issue at all. I don’t view it as an issue. I don’t think he does. Like I said, I can put anything aside for a team, business, whatever, just to get the job done. No problem with that.”

Despite the players dismissing the Koepka-DeChambeau storyline, it’s already on U.S. Ryder Cup captain Steve Stricker’s mind. He said as much in an interview with Wisconsin Golf’s Gary D’Amato last month.

“Yeah, it’s not making my job any easier, you know?” Stricker said.

And while the Koepka-DeChambeau rivalry has many chapters, the origin story had been somewhat unclear. Koepka had previously said DeChambeau went back on his word after they talked at the 2019 Northern Trust at Liberty National, but never explained what “back on his word” was in reference to. He was asked to elaborate on the origin again on Tuesday and at first didn’t go much further, beyond saying “we had a conversation at Liberty, and he didn’t hold up his end of the bargain and I didn’t like that, so I’ll take my shots.”

“It was at Liberty. He didn’t like that I had mentioned his name in slow play, so we had a conversation in the locker room, and then I guess we said something else in the press conference but didn’t mention his name in it, and he walked up to [Koepka’s caddie] Ricky [Elliott], said something. It was, ‘You tell your man if he’s got something to say, say it to myself.’ I thought that was ironic because he went straight to Ricky. Ricky told me when I came out, hit a few putts, and then just walked right over to him, we had a conversation. We both agreed we’d leave each other out of it and wouldn’t mention each other, just kind of let it die off, wouldn’t mention each other’s names, just go about it. So then he decided I guess he was going on that little, whatever, playing video games online or whatever, and brought my name up and said a few things, so now it’s fair game.”

What Koepka means when he says “playing video games” is likely in reference to something that happened five months after The Northern Trust — and also after Koepka appeared in ESPN’s Body Issue. DeChambeau was live on a Fortnite Twitch stream when Koepka’s Body Issue photoshoot was brought up.

“I don’t think his genetics even make him look good,” DeChambeau said. “Did you see the Body Issue? He didn’t have any abs. I have abs.”

Then, as a timeline of events might tell you, it escalated from there.

So, where do we go from here? Regardless of what fans think of the Koepka-DeChambeau feud, it’s safe to say it’s not disappearing soon, and we still haven’t seen them paired together since much of this has happened. Perhaps we will on Sunday of the final major of the year?

“Yeah, I would enjoy it. I would enjoy it,” Koepka said. “I’ll be close to the final group come Sunday. I always feel like I play well in the big events, the majors. I think it would be a lot more people tuning in, with everything that’s gone on [with DeChambeau] over the last two years, something like that, three years. So yeah, I think there would be a lot of people tuning in.”