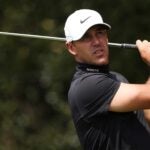 The Brooksie in the “Brooksie” taunts believes PGA Tour fans “can do a better job.”

Of course, the taunts’ target, along with the Tour commissioner, see that second point differently.

Koepka’s comments, following the first round of the Tour Championship, came in response to a lengthy address from Tour head Jay Monahan on Tuesday, when he said that fans’ “harassment of players, caddies, volunteers, officials, staff or other spectators” will not be tolerated and would lead to a tournament ejection. That notice followed numerous occasions this summer where Bryson DeChambeau has been called “Brooksie” by fans, including a heated, ESPN-reported one this Sunday, when a fan shouted it at DeChambeau after his loss in a six-hole playoff at the BMW Championship.

Still, Koepka, when asked if fan behavior has gotten worse, said: “I haven’t seen it too much.”

“I mean, everybody’s, when you’re out there, you can hear everything, so everybody’s been told something or said something they didn’t like, and, I mean, that’s sports,” said Koepka, who’s been feuding with DeChambeau for over two years. “It’s not a sport if you got people cheering for you and against you. It’s kind of difficult to call it a sport, isn’t it?

“But, yeah, I mean, I think there comes a time and a place I think where you can see fan behavior get a little excessive. You kind of see it in the NBA a little bit. Maybe out here as well. But, like I said, everybody try to be as respectful as you can be. Players, everybody, the fans, everybody could use a little bit more respect.”

Bookending Koepka’s comments on Thursday and Monahan’s on Tuesday was a Ryder Cup dinner on Wednesday — attended by, yes, Koepka and DeChambeau.

The two are among six players to receive automatic selections to the U.S team, and captain Steve Stricker invited them to break bread ahead of the biennial event at the end of the month. “It was good,” Koepka said “Food was good. We just talked about everything that’s going on right now, what we’re doing kind of leading up to it, a couple who we think might suit the team well if they would be there. It was a good dinner. We enjoyed it, and it was fun.”

But unless the room was the size of a par-5, Koepka and DeChambeau were as close as they’ve been in months. Stricker recently told Sports Illustrated that the issue “has been put to bed,” and, while DeChambeau did not talk to reporters on Thursday, Koepka offered just two words when asked if the two talked about the recent escalation of their beef on Wednesday:

Koepka was also asked by reporters what he would do if badgered by a fan.

“If I got something smart to say, I’ll say it,” Koepka said “But I mean most of the time I don’t give them the time of day. I hear everything. It doesn’t matter what you say, I’m so focused on what I got to do. And let’s be honest, most of them wouldn’t say that stuff if they were in the street right next to me, so, and I know that, but you put a rope in between us and they think it’s going to protect them.”