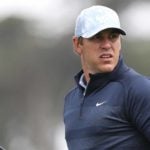 Brooks Koepka's pre-PGA Medalist range session began with a blow-up and ended with a solution.

There’s been a theory floating around the internet that Brooks Koepka doesn’t care about golf tournaments that aren’t the major championships. With more major victories (four) than he has “regular” PGA Tour wins (three), Koepka’s apparent selection bias is a bit of an easy target, particularly given that he’s admitted he focuses much more of his attention toward the big ones.

From a distance, the idea that Koepka could seemingly only get up for the majors has only been aided by his performance over the last 14 months.

In the time since his PGA Championship win last May, Brooks has been both winless and (seemingly) hopeless — undergoing knee surgery and dealing with a litany of missed cuts.

“I just need to play good. I’ve played so bad lately,” he said prior to the start of the 3M Open a few weeks back. “My good shots are good, but I’ve just got to bring that bottom level up.”

Then, he turned it on — finishing T2 at last week’s WGC-FedEx St. Jude Invitational. During Thursday’s PGA Championship opening round (his first major since last July), the 30-year-old kept it rolling, shooting a blistering 4-under 66 that was good for second in the field. Brooks Koepka was back, and just in time for the majors.

After his round, Brooks told reporters the spark behind his recent performance came not from a major championship bump, but rather from a pair of rage-filled range sessions with coaches Pete Cowen and Claude Harmon III at Medalist Golf Club in Hobe Sound, Fla.

“When we missed the cut at 3M, I went back home and spent Sunday with Pete (Cowen) working at Medalist, and then Monday was up with Claude,” Koepka said.

In two days of practice, Koepka exorcised a pair of demons. The first, making a significant swing change to fix a short-sided miss. The second, taking out months of pent-up frustration on the range in the form of high-flying, metal projectiles.

“To be honest with you, it was probably the first time I think I hit 40 balls,” he said. “There was a club 70 yards behind me, I chucked it, and then threw one in front of me.”

After the sessions were over, Koepka emerged a new man just in time for the PGA Championship. Still, to hear him tell it, all credit goes to the 3M Open. Maybe Koepka does care about his performance in the non-majors, after all.