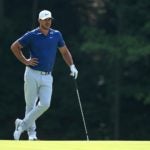 Brooks Koepka took to the mic before his practice round on Tuesday at the 3M Open and sounded down about his golf game.

“I just need to play good. I’ve played so bad lately,” he said. Koepka typically has this way of simplifying things. It’s been an underwhelming restart to the season for Koepka. He finished T32 at the Charles Schwab Challenge, 7th at the RBC Heritage, withdrew from the Travelers after his caddie tested positive for the coronavirus, missed the cut at the Workday Charity Open and finished T62 at the Memorial, shooting 80 in challenging conditions on Sunday.

Koepka has slipped to No. 6 in the world; still, he enters this week’s event as the second favorite behind Dustin Johnson and didn’t sound like he’d lost any faith in his game.

“I’m just trying to find things. Every week I feel like the results aren’t there, but it’s getting better and better. My good shots are good, but I’ve just got to bring that bottom level up. I’ve hit some real costly shots. I seem to miss it short-sided every time and that’s been kind of the downfall of why I haven’t played well.”

Koepka has still been recovering from knee surgery he had in the fall but insisted that Sunday was the best he has felt in quite some time. Everyone who has experienced knee pain will relate: Uphills are fine, he said, while downhills are trickier to navigate. On Muirfield Village’s frequent elevation changes, that was put to the test.

“I don’t see it being an issue. I have my trainer coming in, he’s helped work on it quite a bit over the past eight months and I think it will be just fine,” Koepka said. “It’s not an excuse for why I’ve been playing bad, I can promise you that.”

Koepka is keeping a particularly busy schedule; he’s still outside the FedEx Cup Playoffs and is looking to improve his number as the 2019-2020 season comes closer to its abbreviated conclusion. Asked if he remembers ever playing so much golf in a row, Koepka reached back to his Challenge Tour days, when he would play five to seven weeks in a row before an off-week. “Still, I’ve had weekends off,” he pointed out.

“It’s been a while, so I just want to play good. Right now, if things ended today, I’m not even in the playoffs, so I need to step it up and start playing well and get back to what I know I can do.”

Koepka has become increasingly comfortable speaking on delicate issues in recent years. So it was particularly interesting to hear him asked about George Floyd, a Black man who died at the hands of a Minneapolis police officer on May 25, setting off a wave of Black Lives Matter protests across the world.

“Well, it’s tragic. I mean, it’s pathetic what happened. To see somebody’s life go — and then you watch it multiple, multiple times, it’s tough. You know, I get chills right now just even thinking about it,” Koepka said. “What happened is uncalled for and, you know, if there’s anything good, we’re starting to see change and I think that’s important. As a world, as people, we need to continue to grow and I think we’re at least bringing light to it now. Racism is a big issue and I think we’re on our way now. People are becoming more vocal, everyone’s becoming more vocal and I think it’s becoming very important and it’s definitely showing.”

Finally, Koepka’s competitive streak shone through in the presser. Asked if he was intending to join the “arms race” budding on Tour and including players like Bryson DeChambeau and Tony Finau, Koepka offered a terse response.

Brooks Koepka’s good. And he’ll get his next chance to remind the world when he tees off on Thursday.