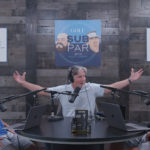 Brandel Chamblee wants to make two things abundantly clear. The first, that he doesn’t “hate” Tiger Woods. The second, that he still believes Woods has gotten less out of his talent than any golfer in history.

Sound contradictory? Well, Brandel says, maybe you’re just not looking at it through the same lens.

“I think in 500 years we’ll be talking about Tiger Woods the way we talk about Shakespeare,” Chamblee told Colt Knost and Drew Stoltz on this week’s episode of GOLF’s Subpar. “You can’t sum the guy up, you just can’t.”

But while Tiger might be an impossible figure to paint in broad strokes, that hasn’t stopped Chamblee from holding hardened stances on some smaller elements of Woods’ career. Like his criticism of Woods’ parting ways from longtime swing coach Butch Harmon and subsequent swing changes in the mid-2000s.

In later years, Chamblee offered his most biting swing change criticism, opining that Woods had gotten less for his talent than any player in the history of golf. On its face, Chamblee’s wording sounds sizzling, but he says his argument is far from controversial, even today.

“Not only do I stand by it, there’s math involved in that,” he said. “If you extrapolate his win percentage from when he decided to change his golf swing in ’97 to when he started winning in ’99. Do the same thing from 2003 to 2005 and then do the same thing yet again from 2010 to 2012. And you start to think of the majors he would have won then, I can’t think of another player in the world that you could have so definitively said left 10 majors, minimum, on the table.”

Even with dropoffs caused by injuries, swing changes and other factors, Woods has won more than 22 percent of his PGA Tour starts, the best winning percentage in Tour history. But Chamblee isn’t wrong to wonder whether it might be higher, had he not fiddled with his swing. During a stretch from 1999 to 2001, Woods won a staggering 52 percent of his starts.

Still, as far as Chamblee is concerned, his criticism has little to do with Woods. It was merely an observation of his swing change’s impact.

You can watch the rest of Chamblee’s interview on Subpar, including why the “greatest ever” debate isn’t as simple as it seems, in the video below.