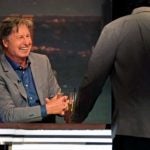 Brandel Chamblee has never been one to mince his words when analyzing PGA Tour players.

Brandel Chamblee has never been one to mince his words. The matter-of-fact discourse he provides as an analyst for Golf Channel has always been polarizing, but ultimately the honesty he brings to the table has a valuable role in golf media. But it’s also not often that he’s forged many friendships with the players he covers and analyzed. It turns out, that’s partly by design.

On this week’s episode of GOLF’s Subpar, Chamblee explained to hosts Colt Knost and Drew Stoltz that he makes no effort to get extend his relationship with players beyond the professional capacity. It’s nothing personal, it’s just business.

“I think my job is incompatible with being friends with Tour players,” Chamblee said. “It’s not my job to be their friends, it’s my job to analyze them. And honestly, I don’t want to get to know them.”

Chamblee’s reasoning is simple: there are enough people in golf media and the TV business who know the players on a personal basis — there is no risk of their voices not being heard or their stories not being represented. It’s his job to critique and challenge the players, and if he knows them personally, that can be harder to do objectively.

“If I get to know them, I may like them or I may not like them,” Chamblee said. “And I don’t want to like or not like them. I want to feel indifferent about them so that when I go on the air I’m speaking from a place of information. From a place of equanimity.”

It’s a bit of an old-school journalist ethos to be so staunchly opposed to getting too close to a subject for fear of breaching objectivity, but it’s one Chamblee takes seriously. But biases are impossible to put out of anyone’s mind, and some players make it hard.

“Rory (McIlroy) makes my job difficult,” Chamblee said. “How in the world could you not love Rory McIlroy? He’s the most thoughtful, brilliant, honest, engaging superstar you’ll ever come across … The fact that I know I like Rory puts a govern on my comments.

“It’s better from my perspective if I don’t feel one way or the other about the player.”

Check out Chamblee’s entire segment on Subpar below as he discusses his pro golf career, his opinions on the “greatest golfer of all time” debate and more.