Augusta, the city and the club, blends its past and present as few places do 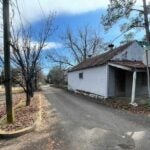 A streetscape in the Harrisburg neighborhood, not far from Augusta National.

When we last met, back in 2020, I was in Orlando, asking David Duval about how Tiger has changed over the past 15 or so years. They had just played in the final round of the Father-Son and Other Interesting Relationships event, Tiger with his son, Duval with his. Tiger’s golf was uneven but often good, and his interactions with Charlie were telling. He let his boy (age 11) do his own thing. He gave him room.

I drove from Orlando to Augusta, to start working on a story about two tired downtown Augusta neighborhoods that Augusta National’s leadership — working with various agencies, public and private — seeks to invigorate. If you know what the Cousins family did in East Lake, in Atlanta, that gives you a crude idea of what’s in mind here. This project will require many years and many, many millions. This is not a TV-show makeover being planned here. This is life.

Hootie Johnson, a former club chairman, lived in one of the neighborhoods, called Harrisburg, in his earliest years, in the 1930s. Jim Dent, a former Tour and Champions Tour player, went to the school in the other one, Laney Walker, in the 1950s. Augusta, the city and the club, commingles its past and its present as few places do.

I had never been to Augusta in late December before. On Dec. 21, on that Monday night, dozens of people were gathered in one of Augusta National’s tournament parking lots to set up telescopes and behold Jupiter and Saturn in conjunction. The downtown Marriott was about $100 a night, or about $600 less per night than it is during the Masters. The Fresh Market on Washington Road, across the street from club’s main entrance, was loaded with holiday cheer. The next morning, you could see glimpses of club green with the naked eye. Members and guests were playing, though out of view.

Tiger is surely already thinking about Thursday, April 8, the first round of the 2021 Masters. He’ll get a free dinner two nights earlier, courtesy of Dustin Johnson. Yes, we’re rushing things. Right about now is a good time to be looking ahead. It won’t be the Masters-as-usual. But it will be the Masters. Jack Nicklaus started thinking about the Masters when he played his first tournaments of the year, in the winter, on the West Coast. Any year he left Augusta without winning he was mildly depressed. Since then, everything and nothing has changed. Tiger knows the feeling. Jack won his sixth at age 46 in ’86. Tiger has five coats. He’s 45.

There’s something gorgeous about Augusta. I’m not talking about azaleas in bloom. They do their own look-at-me screaming. I’m talking about the shotgun shacks in Harrisburg and Laney Walker, some of them far too gone to be rehabbed. They’re gorgeous like Jay Gatsby was gorgeous. They’re not hiding anything. Their history is there for any of us to see. The name, shotgun shack, comes from the depth of these houses, or the lack of it. A clean shot through the front door would go right through the back. A lot of the club’s employees, going back years, came from Harrisburg and Laney Walker.

I was there for two nights and parts of three days. On my way out of town, I stopped at The Patch, what locals call the Augusta Municipal course. I bought a large bucket and went to the grass range. A mishmash collection of balls if ever there was one, all your favorite colors, all your favorite brands.

I paid for the balls at the counter in the no-frills pro shop and said to the gent, “I understand Jim Dent’s son is the head pro here.”

There was a junior tournament onsite that had scores of kids from different age groups. There were 10 players in the 10- to 12-year-old age group. A boy listed as G. Kelley shot 34 for nine holes and won by five. I asked one of the tournament administrators about the kid’s golf. “He’s a pretty good little player,” came the answer. “He’s not gonna shoot 34 every day.”

It was beautiful, in its no-fuss ease. I started my drive home.