Charlie Woods the golfer was good, and so was Tiger Woods the father 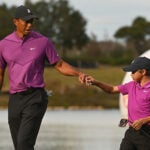 ORLANDO, Fla. — It’s been said often, that you can tell a lot about people from the way they play golf. Well, 11-year-old Charlie Woods, the son of a Hall a Famer and named for a Hall of Famer, played the first televised competitive round of his life on Saturday, at a resort course here, and this is what we learned:

When a tee shot on a par-3 hit a bank and trickled into a pond, he gave the sole of his iron a love tap on the firm turf here.

He always knew when to mark, when to putt, when to play, when to get out of the way. He walks to the tee with his tee and ball in one hand and his driver in another. He takes two waggles and goes. If all of America played golf at his pace, 18-hole rounds could be played in three hours again.

When Mike Thomas, Justin’s father, tried to go double-or-nothing on one practice-green putt, in a desperate effort to get back a buck he had lost to the kid, Charlie said, “That’s OK — I like my dollar.”

He has good focus.

A round that lasted 4½ hours, and there was never a moment where Charlie seemed bored. The opposite.

On the 3rd hole, a 422-yard par-5 for him, Charlie hit a driver and a 5-wood from 175 yards, and made about a three-footer for an eagle. This event, the PNC Championship, is a scramble format, but on that hole, the Woods team went Charlie-Charlie-Charlie.

What’s said less often is that you can tell a lot about parents by the way they play with their children. And if you believe that, Tiger Woods appears to be an extraordinary father.

Father was appropriately jubilant, when Charlie made that eagle on 3, but you would never call his celebration excessive.

In his post-round remarks to reporters, father talked with pride, but not excessive pride, about Charlie’s play on the Ritz-Carlton Golf Club course here, with TV cameras trained on him and maybe 100 or so spectators watching. Tiger said that Charlie did on Saturday what he does at home, when they play at Medalist. It was obvious that Tiger would not have had son play in the event if Charlie’s golf, and his maturity, were not at the level where he could handle it.

But the most revealing moment of all actually had almost nothing to do with golf, but told you something about Tiger as a father.

Tiger was a step or two behind his son, and Tiger stepped right over the driver like it was a crack in the sidewalk and kept on going. It was beautiful, and likely telling.

Have you seen other parents of junior golfers these day? Oh, son, you don’t have the long tee you want for this hole? Let me go to my bag 30 yards away and get you one. There’s a lot of that going around, but not likely with Tiger and Charlie. Here’s Tiger: You dropped it, you pick it up. He’s got his own back to worry about anyhow. Golf, played the right way, teaches responsibility. It teaches it a thousand ways to Sunday. The rules. The etiquette. The discipline it takes to become competent. The whole thing.

Charmingly, father and son dressed similarly, but not identically. Each wore black pants. Each wore a shirt in the fuchsia family, but in different styles and in different shades. Charlie wore black shoes and Tiger white. Each has a fuzzy Frank headcover on his driver.

On Sunday, they will play the second and final round. They’re competitive because Tiger is still good at golf, his son is good at golf, and he’s playing from a set of tees that are completely appropriate for an 11-year-old golfer. Although he did slug one drive, downwind on a firm fairway, that went over 240 yards.

There were three holes where Tiger had Charlie drive first, and when he drove it long and in play, Tiger didn’t even bother to put his ball on a tee.

On 18, a par-5, Charlie’s tee was almost 150 yards ahead of his father’s. Charlie played first and hit a good one.

He did his job. Tiger raised a thumb in the air and headed down the fairway. He had no chance of catching up to his son, not until they met at their ball.